Most of the time when a Transformer comes out as an exclusive, they do so in one store chain or one region of the world. However, the Generations incarnation of Wheelie (along with several other figures including Swerve and Springer) are different. In the Summer of 2012, a series of repainted and retooled figures were released exclusively in Asia. The original intention was to keep these as Asian exclusives to attract that ever growing market. However, at San Diego Comic-Con 2012, Hasbro announced these figures would be brought to North America around November of 2012. The version being reviewed here is one of the Asian versions from a case pre-ordered before the North American release had been announced.

Wheelie was quite a surprise in this wave. Traditionally a smaller Transformer, we last saw a G1 inspired Wheelie as a Legends Class figure in the Universe 2.0 line. He's also been one of the more maligned characters in Transformers fiction for years since he was played partly for laughs in the original series. However, in recent times he has been portrayed more as he was originally intended in comic books, a slightly off kilter survivalist who has some issues (well, in the IDW comics, who doesn't?). The base sculpt for this redeco is the "Reveal the Shield" Special Ops Jazz mold. More recently, this mold was used to create Botcon 2012 Kick-Over/Kick-Off. This review will focus on the changes made to the figure for this release, so check out the reviews linked above for more details on the sculpt itself.

Packaging:
Wheelie's packaging design borrows the Generations packaging design seen on recent figures such as Sky Shadow and Warpath with a red, mechanical looking background and character art in the corner. Wheelie's artwork is actually repurposed artwork from Special Ops Jazz, to the point where he's still holding Jazz's weapon instead of his own slingshot. The head is different however, so there was some creative Photoshop work there. It is also interesting to note that unlike the previous Generations releases, Wheelie is packaged in robot mode, not vehicle mode.

It is interesting to note that at Comic-Con, a point was made to specify that Chinese characters printed on the packaging would be left intact to help preserve their exclusive mystique. However, the versions of these figures released in Asia had no Asian lettering on the packaging while the samples Hasbro showed at SDCC did. If warranted, I will come back and update this review once the North American versions are released.

Robot Mode:
When I first heard that the Special Ops Jazz sculpt was being used for Wheelie, I instinctively dismissed this as a bad idea. However, as soon as pictures began leaking and I realized there would be a new head sculpt plus an extensive redeco on the body, I really warmed up to the idea. Once I had the figure in hand all my reservations faded away. There is no doubt who this character is. It's Wheelie, but perhaps a more mature and powerful version of the character than we've known in the past. He's no Mini-Bot anymore, that's for sure!

Two major changes have been made to this sculpt for this release. First, the head sculpt is completely new and it looks awesome. Based on the head from his animated appearance, Wheelie's head has a "helmet" section that wraps around to the back of his head but leaves part of the top exposed for a column to stick out a bit (it winds up looking like a giant button). The front of this helmet section has a small strip sculpted into the top that resembles a head mounted light and right under that is the brim that looks like the front part of a hat. This detail has its origins in the original Wheelie figure, which had a visor of sorts over his head (formed from the cover of his cabin section). Wheelie has a rather smooth and young looking face with a prominent chin piece and his mouth is set in a slight smirk. It's not a nasty one, but more of a playful look that befits the character. Essentially, this head sculpt is perfect. I give a lot of kudos to the designers for putting so much attention into it!

The second change for this figure involves its primary weapon. Whereas Special Ops Jazz and Kick-Off/Kick-Over came with a blaster that folded out into a longer weapon, Wheelie has a slingshot. To those unfamiliar with the character this may not make a whole lot of sense. In his first appearance in the 1986 "Transformers: The Movie" feature film Wheelie was shown using a slingshot that fired explosive charges as his weapon. This carried over into his Universe 2.0 incarnation and now appears here. It's a wonderful nod to the original character. What's neat is the slingshot is sculpted with some nice mechanical greebles, making it look like a "high tech" slingshot. Even better? A peg has been sculpted to the side of the slingshot so he can hold it as a blaster as well!

As great as these two modifications are, ultimately the colors have to sell us on the idea that this is a whole new character and I am happy to say they do that wonderfully. Wheelie's primary plastic colors all borrow from his previous incarnations. These colros include: orange, silver, grey and a rust colored orange. These colors are used alternately up and down the body of this figure. The best example are the arms, which start with grey at the top, then connect to an orange panel, followed by a grey shoulder piece, then a silver elbow, orange forearm and finally a silver hand. Similar patterns repeat on the legs which have grey at the top, then the rust colored orange, then a mix of silver and grey panels on the insides and orange panels on the outside leading to silver feet. This alternating pattern of colors really draws the eye and keeps any one section from looking monotonous.

Wheelie's paint decos are done in orange, silver, dark metallic grey, dark orange (to match the rusty orange plastic), blue, red and light blue. If you look over that list, that's a very impressive number of colors for even a Deluxe scale toy. Most of these colors are focused on the upper body, especially around the chest and head. The chest section has the darker orange wrapping around the front of the chest (what would be the front of the car). His headlights are painted yellow with light blue forming a stripe that comes to a triangular point int he center. Right on top of this is a red Autobot symbol. The head is orange on the helmet section, but has dark metallic grey on the visor and the "button-like" portion of the head. The eyes and the "light strip" above his visor are painted blue and the face is silver. It's quite an intricate set of decos and in this day and age where decos are being stripped away from figures it's very refreshing to see a figure with so much attention to detail. Some more of the dark orange shows up on the doors (forming his "wings") and on the sides of his lower legs. A bit more silver can be found on the speakers that are mounted on the back of his doors/wings. Overall, the colors here are absolutely fantastic and wonderfully done. They match the character, they are complex and layered and they have great visual appeal.

All of Wheelie's joints are nice and tight. This includes the "C Clip" mounts on the back of his doors/wings that allow the speakers to be deployed. I was very pleased that after so many uses of the sculpt (the original Jazz, three times at Botcon 2012, United Stepper and now this) the sculpt remains tight and solid. 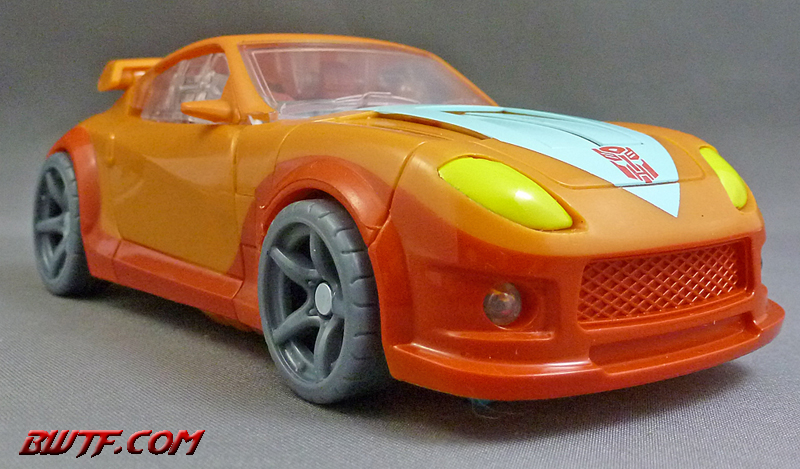 Vehicle Mode:
In general, Wheelie's previous two toy versions seemed to be based more on fanciful vehicles (perhaps Cybertronian ones) than Earth vehicles. However, now that he's basically using the same body frame as Jazz, his vehicle mode is more of an Earth based one with some resemblance to the Pontiac Solstice which was Jazz's vehicle mode in the live action movie from 2007. Parts seemingly borrowed from the Solstice include a front grille with a cross hatch pattern (though Wheelie's is much wider and not divided), the "tear drop" style headlights and the overall oval shape of the vehicle with a shortened back end. The result is a rounded, sleek looking vehicle that could easily be the "Earth version" of Wheelie's former vehicle mode which was also oval in shape with a front end that was longer than the back. The end result is a vehicle mode that looks like it belongs just as much to Wheelie as it does to Jazz (something I never thought I'd say).

In this form, most of the orange armor panels wind up condensing, so Wheelie is mostly orange from front to back. A line of darker orange is painted starting from the front of the car, all along the sides and wrapping around the back, which looks really nice. The light blue paint detail from the robot mode winds up condensed here on the hood of the car, simulating a detail from the Universe 2.0 version of the character. This goes even further back as a reference to a spot of blue around the same area on Wheelie's original deco (seen only in early promotional catalogs in the G1 era, but never sold in stores). The windows are now revealed to be clear plastic along with the fog lights under the headlights. These clear plastic sections have orange paint on them to fill in the necesarry details on thop and sides, matching up very nicely with the orange plastic used for this figure. On the back the rear windows are painted metallic silver and the rear lights are a neon shade of orange. Overall, the color scheme is distinctly Wheelie's and there's no mistaking just who it's meant to be. It's also very different from any other incarnation of this sculpt, so it stands on its own very nicely.

In this form you can still deploy the speakers as "audio weapons" (or a party starter?) in this mode by opening the doors, swinging/rotating them over and closing the doors again. There's only one down side in terms of functionality. If you want to move the car, it doesn't roll very smoothly because of how much the slingshot sticks out at the bottom. You can push it at an angle to alleviate this slightly but it doesn't get out of the way completely. This is perhaps the singular flaw in an otherwise very well done retool/redeco.

Final Thoughts:
I never thought I'd be going wild over a Wheelie figure but this is a fantastic example of a redeco/retool. The only mark against it is the slingshot causing some drag in vehicle mode. Despite that, I do really like this figure and it is recommended!