Official Product Images and Description in italics are from BigBadToyStore:

The battle between heroic Autobots and evil Decepticons continues on the Bumblebee Cyberverse Adventures animated series! As a powerful new threat targets Cybertron, it is up to Grimlock and his new friends, the Dinobots, to unite and save the planet! Discover the unique powers and skills of each Cyberverse character, and see how those powers will be used to defend Cybertron… or threaten it. Easily convert and attack with Bumblebee Cyberverse Adventures Deluxe Class figures (Each sold separately)! Convert Dinobot Slug figure from robot to triceratops mode in 25 steps. Attach accessories in both modes and imagine Dinobot Slug unleashing his Blaster Fire Fury attack move! Kids can collect other Deluxe Class figures (each sold separately) to discover the signature attack moves of characters from the animated series. Transformers and all related characters are trademarks of Hasbro.

The Cyberverse cartoon came to an end in 2021, but not before introducing some new characters: the Dinobots! While Grimlock has been part of the Cyberverse story since the beginning, the rest of the team was not introduced until the fourth (and final) season of the show.

Packaging:
The packaging for the Deluxe Cyberverse figures released in 2021 are rectangular with an open window without a plastic window. This is part of Hasbro's commitment to reducing plastic in their packaging. That does mean you can touch the figure right in the box, so some fans may not be crazy about that. Me personally? I am fine with reducing plastic, and so long as the figure is intact I'm all good. The packaging carries over a lot of the design elements of previous Cyberverse packaging including a black vertical "Transformers" logo against a yellow background. A large illustration of Slug in beast mode is featured in the front with him charging forwarding blasting away. The background features the green "skin" like pattern from the "Dinobots Unite" packaging seen elsewhere in the line. The back of the box features Slug in both modes calling out a 25 step transformation. It also describes his "Blaster Fire Fury" attack. Interestingly the back of the box uses the "Dinobots Unite" logo.

Accessories:
Slug includes several accessories, which is cool to see since this time there are no build-a-figure parts. These parts are:

Robot Mode:
The Dinobot designs from Cyberverse look like they started with G1 as their foundation, but then built up detailing on top of those basic forms. Slug has a lot of similar features as his G1 counterpart. This includes the top of the beast mode head forming a "helmet" like area behind the robot head, round shoulder areas, what looks like the bottom of the beast mode mouth on his chest and beast mode legs on the sides of his robot legs. However, this design adds more detailing. Perhaps the most obvious are the spikes on his shoulders, hips and chest. I really love the look of this figure. It is both classic and savage looking all at the same time.

Slug's colors are based on his animated counterpart but there were some changes made given the limitations of budget and how parts wound up being laid out in the tooling. Silver, red, gold and gunmetal grey plastic make up this figure. Paint colors include blue, silver and black. The main differences from the animation model (which you can see here) colors are the lower legs and parts of the arms. The arms are missing some gold and the legs have more gold than the animation model. Honestly? I'm not bothered by these differences. He uses classic Dinobot colors and they look fantastic together.

There are sixteen points of articulation on this figure. This includes three on each arm, four on each leg and even waist articulation. His fists each have 5mm ports allowing him to hold his weapons. 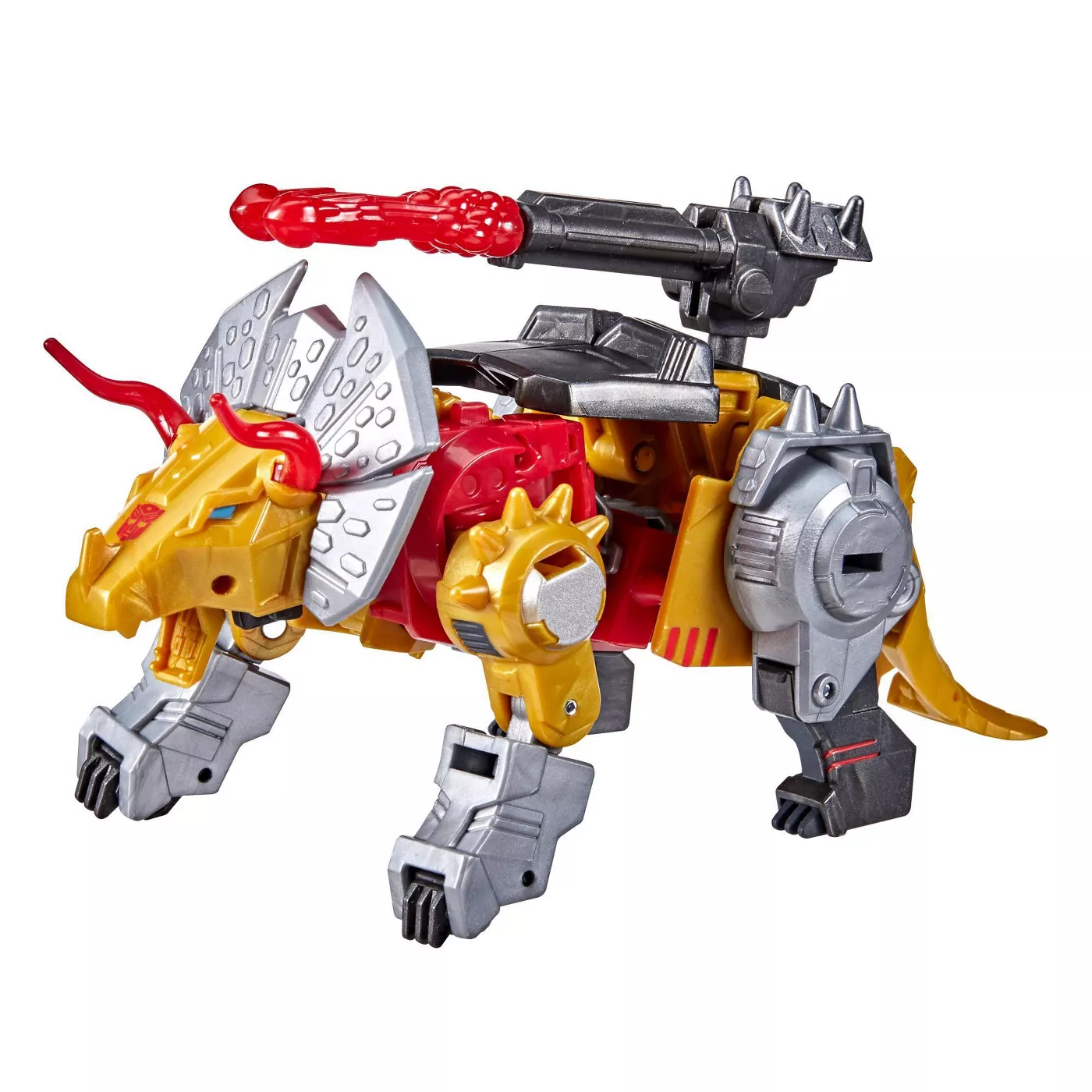 Beast Mode:
In beast mode, Slug is exactly what you'd expect - a fully mechanical triceratops. No bio-mechanical stuff here. This guy is Old Skool Dinobot in appearance all the way. Like the robot mode, he has a lot of the same basic design elements as his G1 counterpart, but the designers have added small little touches unique to this figure such as the wavey shape of his horns, the spikes on his legs and the smaller details like the lines running down the tail. He looks fantastic.

With all the parts of the robot mode condensing into this form, much of the red gets hidden while the silver and gold become more prominent. His horns are translucent red (the same as the Blast Effect) which is a fun little touch. A nice finishing touch on the deco is a red Autobot symbol on the head which is a direct callback to G1 Slag from the original animated series.

Slug has eleven points of articulation in this mode. Three in the front legs, two in the rear legs. His mouth can open and close as well. You can add on two points if you include the ability to move the horns (but I personally don't count that). The weapons attach to the ports on his back and they look great, giving him a Dino-Riders like appearance.

Final Thoughts:
Slug is a great example of the Cyberverse Deluxe Class. I only wish the other Dinobots all received the same treatment. So far Grimlock is the only other one to be made in Deluxe form. Recommended!