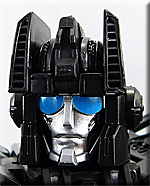 In the Summer of 2015 the final component of the Protectobot Combiner Defensor was released: Hot Spot. Fans could finally complete Defensor who is made up of the following components:

You'll want to read the individual reviews for each of the Protectobots above to see how they form their various modes including the limb modes and Groove's armor mode. This review will focus on Defensor's combined form.

When "Generations" Bruticus was released, he was composed of five Deluxe Class figures. However, this caused some proportion issues where the main body wound up looking too small (or the limbs were too big depending on how you want to look at it). To prevent that issue with these new figures, the torso/head/thigh section is now a Voyager Class figure. The result is a Combiner figure with much better proportions than Bruticus with an impressive size. Defensor winds up measuring about 10.75 inches (about 27.3 centimeters) and 8.25 inches (about 20.9 centimeters) wide shoulder to shoulder. These measurements are based on Blades and Streetwise forming the arms with Rook and First Aid forming the legs. 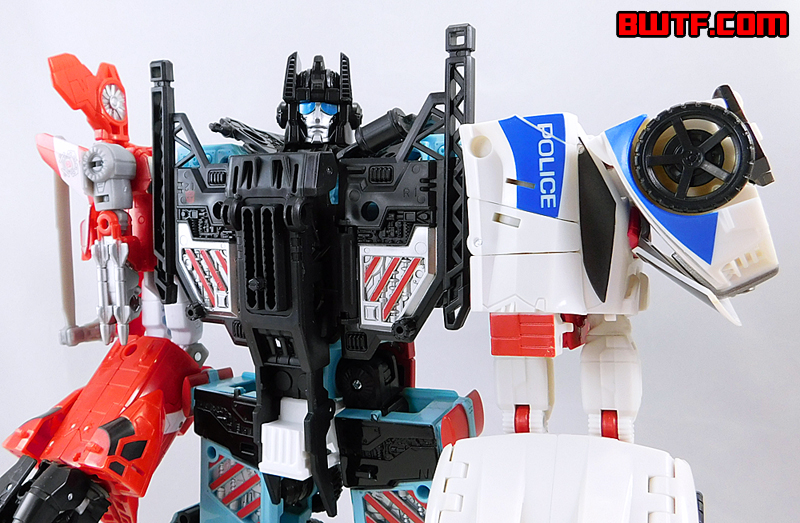 There's a lot of inspiration from G1 Defensor in this design. First let's start with the head. The head features a crest in the center, but also two thin parts that look like vents in the front on either side of the "helmet" section. His eyes are curved and at first they may look like a dour or sad expression, but they're actually based on large glasses often worn by emergency personnel in movies and TV shows. The sides of his head also feature large circles, another G1 feature carried over into this mold.

Also inspired by his G1 counterpart are the panels on the chest. These panels have angles that point upward and feature extensions that rise up beyond the shoulders. The basic shape of these panels is based on the panels that formed G1 Defensor's chest, though they were nowhere near as exaggerated and large. These panels also feature a lot more of the type of intricate mechanical detailing seen on Hot Spot's shoulders and legs in robot mode including the "hazard" stripes over them.

The other section that calls back to G1 Defensor is the waist/thigh area. The waist section has two raised panels that are colored black, similar to the waist piece on G1 Defensor. The middle of the thighs have mechanical details with hazard stripes that are similar to stickers from G1 Defensor's legs.

My copy of Hot Spot has a left leg ratchet joint that moves forward a bit more than it should, so my Defensor has a tendency to lean forward a bit. He doesn't fall, and some minor manipulation of the legs makes the figure look just fine combined.

In terms of aesthetics, my preferred combination has First Aid and Rook as the legs. They are the widest of the four Protectobot limbs and they make for more solid looking legs. The streamlined design of Blades and Streetwise makes them more suitable for arms, though the alternate configuration looks just fine it's just not my preference.

One interesting note. In all the promotional pictures of Defensor and even the model on display at Toy Fair 2015, Groove would attach to his chest so that the wheel points down. However, the way Groove transforms he actually has to be placed with the wheel facing up, otherwise he doesn't attach correctly. You could try to attach him the way the promotional pictures show him but he winds up obscuring the head a bit. I personally don't mind, it looks cool either way and I'm glad with Rook in the team Groove is still part of the team.

Defensor has thirty three points of articulation. This includes eight in each arm and leg. The only major point of articulation he lacks is at the waist. I'm also counting smaller points of articulation such as the ability of the fists to turn at the wrist. The major connection points and the connection pegs themselves are all ratchet jointed so it lends Defensor a certain level of stability. You do have to be careful when moving the arms. The ratchet joint that allows the arms to move up and down is strong enough that the entire shoulder piece sometimes moves with it, dislocating the chest panels. It doesn't always happen, but it happened a couple of times during my reviews.

If you want to attach extra weapons to Defensor there are twelve 5mm ports between all four limbs and the torso. I'm including Hot Spot's fists which wind up on the back. Certain weapons such as Streetwise's shotgun can fit right in there for weapon storage. Other great spots to attach weapons include Blades' rotor engine section and First Aid's sides.

Final Thoughts:
I honestly believe as the waves of Combiner Wars figures have moved forward the combined giants have gotten better and better. Sure Superion and Menasor are cool, but Defensor feels more stable than those two and visually he is a great homage to G1 Defensor. Also considering how awesome each of the Protectobots are individually this makes one set that I highly recommend!