Disclosure: Entertainment Earth was cool enough to provide Ben's World of Transformers with a sample of this boxed set for this review. BWTF thanks Entertainment Earth for their kind consideration. You can purchase your Liokaiser and support BWTF via this link. For a limited time after this review is being posted (November 2016) use coupon code SINGLES to take $20 off your purchase! 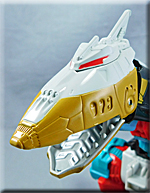 Boxed set includes 6 Decepticons who merge to declare victory over the Autobots as the mighty Liokaiser! Tanks, jets, and space shuttle form robots and dinobird as the most awesome Generation One-era toys from Japan you never knew you missed! Platinum Edtion set features an awesome box, poster, and trading card. Behold the mighty Liokaiser! The Destrons are a foul group of criminals and convicts that also happens to be one of the most elite strike teams in the galaxy. Together, they become Liokaiser, a Combiner whose sheer power is rivaled only by his penchant for evil.

Transformers Generations Platinum Edition sets feature figures with a high level of detail, plus premium features and packaging. These sets highlight some of the most memorable scenes, powerful warriors, and epic storylines in the Transformers universe. This 7-in-1 Liokaiser collection pack celebrates the Combiner Wars. In the Combiner Wars, teams of Autobots and Decepticons combine to form giant super robots and battle with the fate of worlds in the balance.

Imagine it is the latter part of the 1980's. "Transformers", once one of the hottest toy brands around has begun to fade. In North America, the toy line has become dominated by Pretenders and Micromasters but other than a comic book, there is very little media to support it. It is a particularly disconcerting part of Transformers history, especially for a fan like me who grew up with the original line.

Enter: Liokaiser! Originally confirmed at Botcon 2016 (somewhat by accident) this set was officially revealed at San Diego Comic-Con 2016. Who is Liokaiser you might ask? Liokaiser is a Combiner giant formed by the six members of the Destron (aka Decepticon) "Breastforce". The team was named this due to the ability of their chest panels to pop out and form small animal robots. This set only came out in Japan and was never reissued (though four of its members were reworked as Autobots in Europe). To this day the original Liokaiser remains a highly sought after figure by collectors.

For fans not looking to spend thousands of dollars on Liokaiser, Hasbro has created a Platinum Edition boxed set based on the Generation One Breastforce! Using "Combiner Wars" sculpts, this set brings these (former) Japanese exclusive characters into the modern age.

Packaging:
Liokaiser is packaged in a box that is similar in style to other boxed sets such as G2 Superion and Victorion. The box is a large rectangular box with dramatic box art in front featuring Liokaiser combined fighting smaller Transformers. If you are facing the box the right side has a vertical "Transformers" logo on it with the "Generations" logo above it. On the other side is a note about the poster included inside and photos of each team member in vehicle and weapon modes. Below that is the "Combiner Wars" logo with the name "Liokaiser" under it.

That isn't all however. Under Liokaiser's name is a silver reflective strip over a purple one indicating this is a Platinum Edition release. This is likely due to the extra weapons and retooling involved in the creation of this set. Another interesting note: above the photos of the team members is the term "Destrons", indicating the team name for this Combiner. The term "Destron" was used in Japan for many years to refer to the Decepticons and has been acknowledged a few times outside Japan, but it is still relatively uncommon.

The back of the packaging features a grey background with a grid on it. Overlapping that are photos of the individual team members on the side and the combined Liokaiser in the middle. Above that is the following text: The DESTRONS are a foul group of criminals and convicts that also happens to be one of the most elite strike teams in the galaxy. Together, they become LIOKAISER, a Combiner whose sheer power is rivaled only by his penchant for evil.

Dezarus is an "alternate" name for the character also known as Deathsaurus. This character had appeared in North America before as a "Heroes of Cybertron" PVC figure and a Botcon 2005 exclusive. Dezarus is a retool and redeco of "Combiner Wars" Sky Lynx so check out that review. This review will focus on the changes made to the figure for this release.

Accessories:
Dezarus comes with the same weapons as Sky Lynx. This time out they are cast in a blue-grey plastic. Both weapons can still be used as swords individually or be combined into one larger sword. 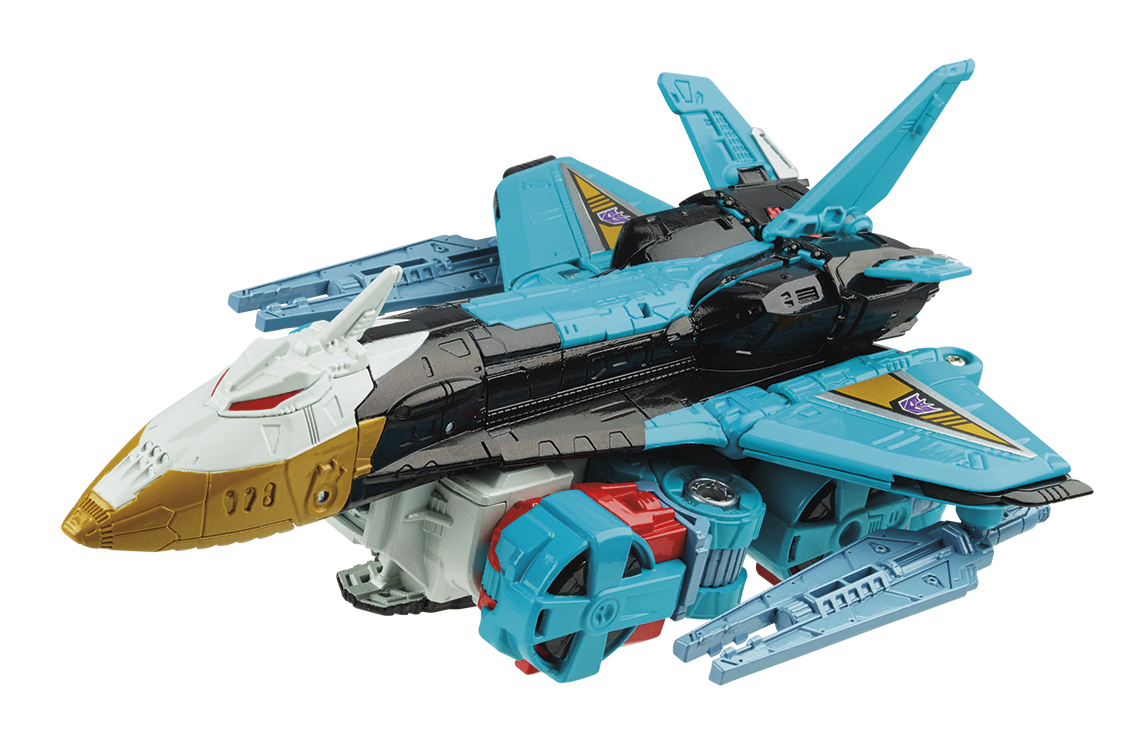 Vehicle Mode:
While this figure carries the name Dezarus he is in fact an amalgam of two different G1 characters: Dezarus/Deathsaurus and the Breastforce team member, Leozak. In this mode you see more of Leozak's influence which comes in the form of the teal color that makes up a majority of the shuttle mode. There are also distinct tampographs on the wings that look like triangles with Decepticon symbols inside. The outer parts are light grey while the inside is yellow. This calls back to stickers on G1 Leozak's wings. Also, having an aerial mode calls back to Leozak more than Deathsaurus (who did not have a vehicle mode in G1).

None of this is to say that there isn't some G1 Dezarus influence. There is a lot of black deco on the cargo section and the rear boosters along with light grey and gold on the front of the vehicle. These colors are more characteristic of G1 Dezarus who featured these colors in his robot mode. It can also be argued he borrows the black color from the Breastforce member Jallguar, who is not a featured character in this set.

From the looks of it, the designers really wanted this figure to live up to the "Platinum Edition" on the box. First off the front of the vehicle has been retooled to feature two "eyes" (for use in beast mode) and a fin on the top of the head. Both these details call back to G1 Dezarus' beast mode head design. The gold on the nosecone also calls back to the beak on G1 Dezarus, who had gold vacuum metallized plastic on his beak.

Look on the bottom of the figure and you'll notice a combination of teal and red colors, which borrows from both Leozak and G1 Dezarus. There are also additional paint decos there that Sky Lynx did not have. This includes black circles on the sides and silver paint on the main hinges of each beast mode leg.

Functionally you can attach Dezarus' weapons to the undersides of his wings or the 5mm ports on the sides of the vehicle. 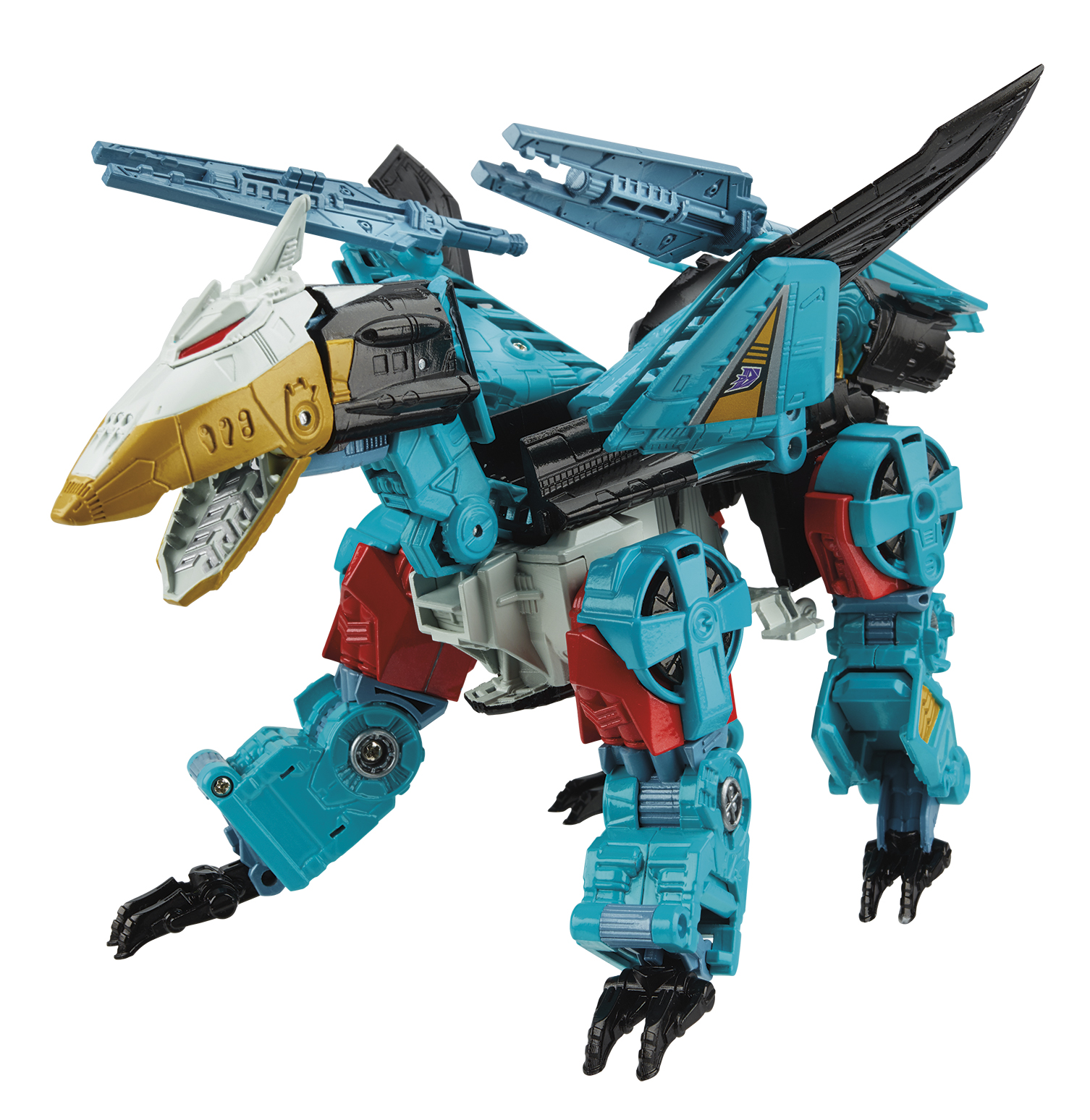 Beast Mode:
Dezarus' beast mode takes inspiration from G1 Dezarus' dragon/bird mode (the original character had elements of both in the animation). This is perhaps the form most long time fans will really need to stretch their imaginations a bit to accept. The four legged form of Sky Lynx is so distinct that I must confess even with the new head and colors it still looks like a variation of Sky Lynx (perhaps a sibling unit or something) rather than a totally distinct Decepticon. However if you chalk this up to being the "modern" interpretation of the character inspired by, yet separate, than the original it becomes much easier to see this beast as the "new" Dezarus.

This form opens up the figure a lot more, so now you get to see plastic in another shade of blue, red and light grey - all mostly concentrated on the lower part of the figure. We also get a better look at the head now that it is not compressed against the shuttle mode. This includes the inside of the mouth which has distinct silver patterns painted where the tongue would be instead of just having the inside of the mouth filled with one color. I was very impressed by this particular detail since it was not 100% necessary, but serves to really show how much care went into the deco on this figure.

All the joints on my copy of this figure are actually tighter than those on my copy of the Sky Lynx figure. I was especially surprised at how solid the neck and legs were. Even his tail is tighter, allowing the blade weapons that form part of the tail to be positioned in various ways for display.

Torso Mode:
For photos of the torso mode, check out the Liokaiser review.

This mode features the other significant retool on this figure: Liokaiser's head! Paying homage to the G1 Combiner, the head utilizes part of Sky Lynx's "lynx head", specifically the top. This calls back to a similar detail on G1 Liokaiser's head sculpt. The bottom of the "lynx head" has been replaced with a full face including two thin eyes and a distinct mouthplate with a raised "T" shaped section in the middle. The head sculpt looks absolutely fantastic and does a wonderful job of calling back to G1 Liokaiser's animation model.

When looking at the colors of this torso, it is important to recall that in G1, Liokaiser's torso was made up of two different characters: Leozak and Jallguar. Between the two, light grey, teal, white and black were the primary colors featured on those characters and thus those are the primary colors you'll find on this torso mode. The teal is mostly on the upper part and thighs while the black and white is in the center. This does a nice job of calling back to the colors on G1 Liokaiser's torso section.

There are some nice, smaller color touches in this form. Silver is found on the chest, mouthplate and the circles that indicate where the joints are for the beast mode legs. The top of the head is black with red eyes on both the top of the helmet and Liokaiser's robot eyes. Red is found mostly on the chest. Gold is used on the mid-body area and the shoulder connection points. A small Decepticon symbol is tampographed onto the fin that forms the right side of the chest. Now these small details may not sound like much on their own, but when you lump them all together on this one torso mode they wind up looking pretty darn great. There's an intricacy to the deco that I really enjoy looking at.

Final Thoughts:
Of all the figures in this set, Dezarus is perhaps the one that diverges the most from his "source" character since he basically mashes up three different characters into one figure. Some fans will be turned off by this, but I think given the structure of "Combiner Wars" Combiner figures this was a nice compromise. Now, I can think of ways the figure could have been retooled more to be "more G1" (perhaps smaller front arms and having him stand on his hind legs) but overall I am happy with the way this figure came out.