Official product photos are from the Amazon.com:

Build the Battlefield Beyond -- The siege is over, but the War for Cybertron has just begun. The Autobots and Decepticons have left Cybertron, but their battle rages on as they speed through space in pursuit of the Allspark. Now, fighters must instantly adapt to battle anywhere in the cosmos. With the advanced A.I.R. (Adaptable Interconnection Retrofitter) Locks system, fighters don’t head to the battlefield -- they become it. Bots capable of converting into Modular Battle Stations can A.I.R.-Lock together in custom configurations to fit the needs of battle. Earthrise figures allow fans to build out epic space battle scenes, featuring figures that convert into Modular Battle Station modes to expand the battlefield (each sold separately, subject to availability). The cunning Decepticon leader, Megatron, converts to tank mode mode in 17 steps. Includes 2 accessories. Transformers and all related characters are trademarks of Hasbro.

It is virtually impossible to have a Transformers toy line come out without certain key characters nowadays, and one of them is the Decepticon leader himself: Megatron! For Earthrise, Megatron has taken on a (slightly) new form. This figure is a redeco and retool of the Siege Megatron figure so you will want to check out that review too. This write up will focus on the changes made to the base figure for this release.

Packaging:
Megatron is packaged in a standard Earthrise box. This box is roughly rectangular with an angled section on the left side. Megatron can be seen in robot mode through a large plastic window with the Earthrise logo over his legs. Requisite elements such as the Transformers logo on the side and the Generations logo above it are present on the right side of the box. The Earthrise logo is displayed prominently on the front end. The angled part of the box features artwork of Megatron hunched over a control panel on (presumably) the Nemesis while a hologram of The Ark shows in front of him. The back of the box features Megatron in both modes calling out a 21 step transformation.

Accessories:
Part of the retooling for this release involves Megatron getting a whole new set of accessories. Here's a rundown:

Robot Mode:
Earthrise Megatron is a fairly significant reworking of Siege Megatron. At first glance I wouldn't blame you if you thought both figures were the same toy with some different accessories, but several parts are actually different:

I actually find it extraordinary just how many parts were changed out or altered to create Earthrise Megatron, and yet the aesthetics are very similar. Clearly the goal was to have Earthrise Megatron lean towards a more G1 animation look with smoothed out parts and much less "battle damage" paint. Unfortunately from an aesthetic point of view he winds up looking rather dull. It is not entirely the fault of this figure. The problem is that three versions of Siege Megatron preceded this figure, so fans have spent a lot of time looking at the baseline figure (which had an amazing deco for its Walmart exclusive release). A retool that, in some ways, takes the figure's aesthetics backwards is a tough sell to fans who may already own the Siege Megatron sculpt several times over.

Megatron features most of the same colors as Siege Megatron including grey, black and black plastic. His deco is "clean" for the most part, with only the legs featuring Siege-like silver "scratches" and "damage". Everything else has very standard deco including red on the elbows, silver on the face and a purple Decepticon symbol on his chest. The deco looks good. It has quintessential Megatron colors and they're applied nicely. It's just not particularly exciting for the reasons mentioned above.

There are twenty four points of articulation in this mode. This includes five in each arm and six in each leg. All the joints are still nice and tight. Each arm features two 5mm ports to attach accessories, and each shoulder has a small peg for Blast Effects. Each leg features a 5mm port on the sides while his feet also have 5mm ports on the bottom. The treads on his back also feature 5mm ports, allowing you to store his weapons back there or attach additional ones from other figures. Unfortunately the designers got rid of the 5mm ports that would have sat on top of the treads. These were neat on Siege Megatron because they gave him the option of having shoulder mounted weapons. You can still accomplish this by attaching pieces from Weaponizers, but it was nice when Megatron could do it all by his lonesome.

A word of warning: the peg on the sword accessory is attached to the sword piece by a small hinge. It is not pinned in. Instead it relies on raised nubs on either side to hold it in place on the sword piece. However, the 5mm ports on the forearms of my copy are so tight than when I attached the sword to either forearm the sword popped off leaving the peg in place. I had to use pliers to get the peg out so be warned.

Transformation to Vehicle Mode:
When I began to transform my copy of this figure I realized that the right hand did not form properly when this figure came off the assembly line. On my copy of Megatron there is extra plastic on the hinge, so when I try to push Megatron's fist into the forearm it will not go all the way. This does not hamper the transformation overall, but it is a very unfortunate quality control issue.

Vehicle Mode:
The goal of this vehicle mode appears to have been to create a more Earth-like tank without the "scifi H-tank" shape that Siege Megatron had in vehicle form. For the most part it works. The base of the tank looks like a large, solid piece with few gaps (unless you look at it directly from behind). The turret has a vaguely Earth-tank shape and as a toy there's a lot going on including ports for Blast Effects and the ability to attach a Blast Effect to the cannon barrel. The turret can also turn in a complete circle, something many Transformers tanks cannot do nowadays.

From a deco perspective, the lower part of the tank is the most visually interesting portion. There, black plastic has silver detailing all over it in various patterns including a brush pattern and a splatter pattern in front. The sides also feature a fun Easter Egg, the alpha numeric code "D16" in silver. "D-16" was the designation given to Megatron in Japan in the 80's. Releases outside of Japan typically did not use these alpha numeric codes.

Final Thoughts:
Earthrise Megatron is not a bad toy. Granted, my copy has a rather silly quality control issue with its hand and forearm ports. However, I can see past those issues and see how this figure would be fun to play with. The aesthetics are good for the most part but having been preceded by three different Siege Megatrons the sculpt has kind of worn out its welcome. Even with all the retooling and new colors, not enough about this figure distinguishes itself from previous Siege Megatron figures to make it worth spending a whole other $30 USD. If you can get this on sale for say $20-25 USD then I would say go for it, otherwise it is only mildly recommended. 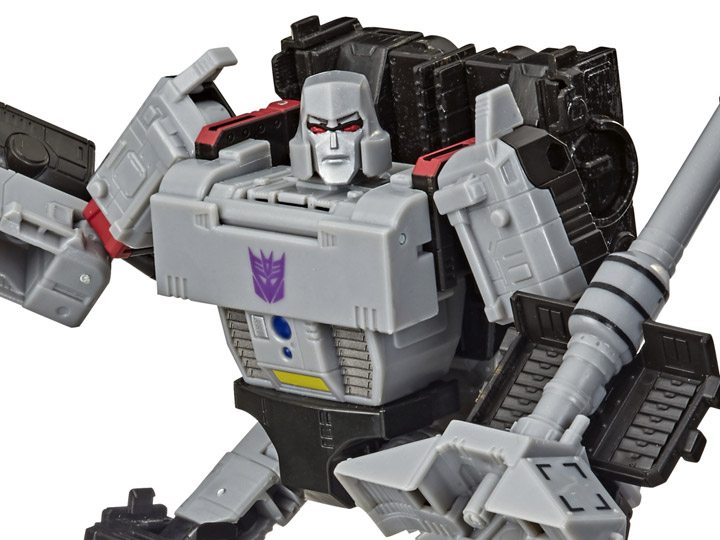 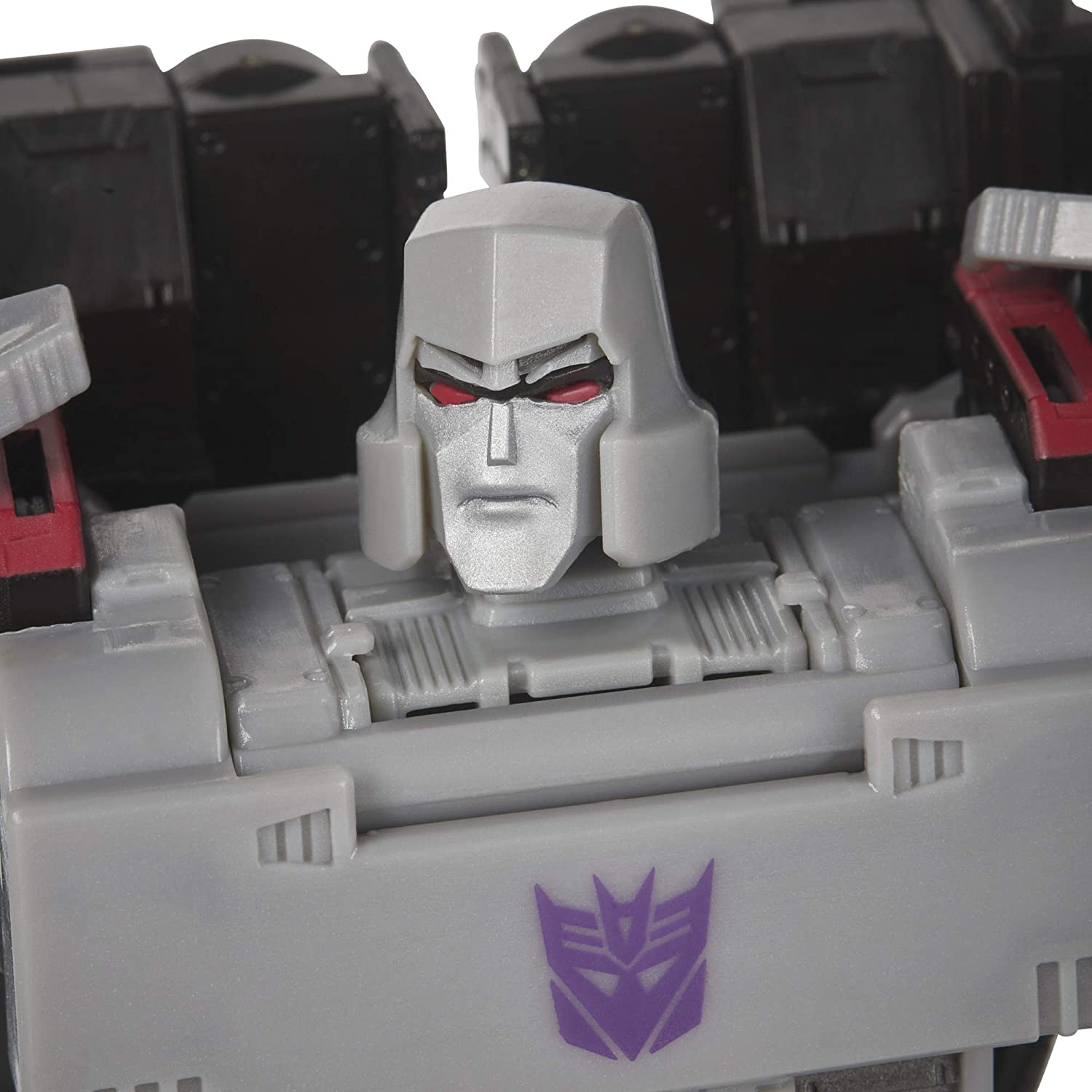 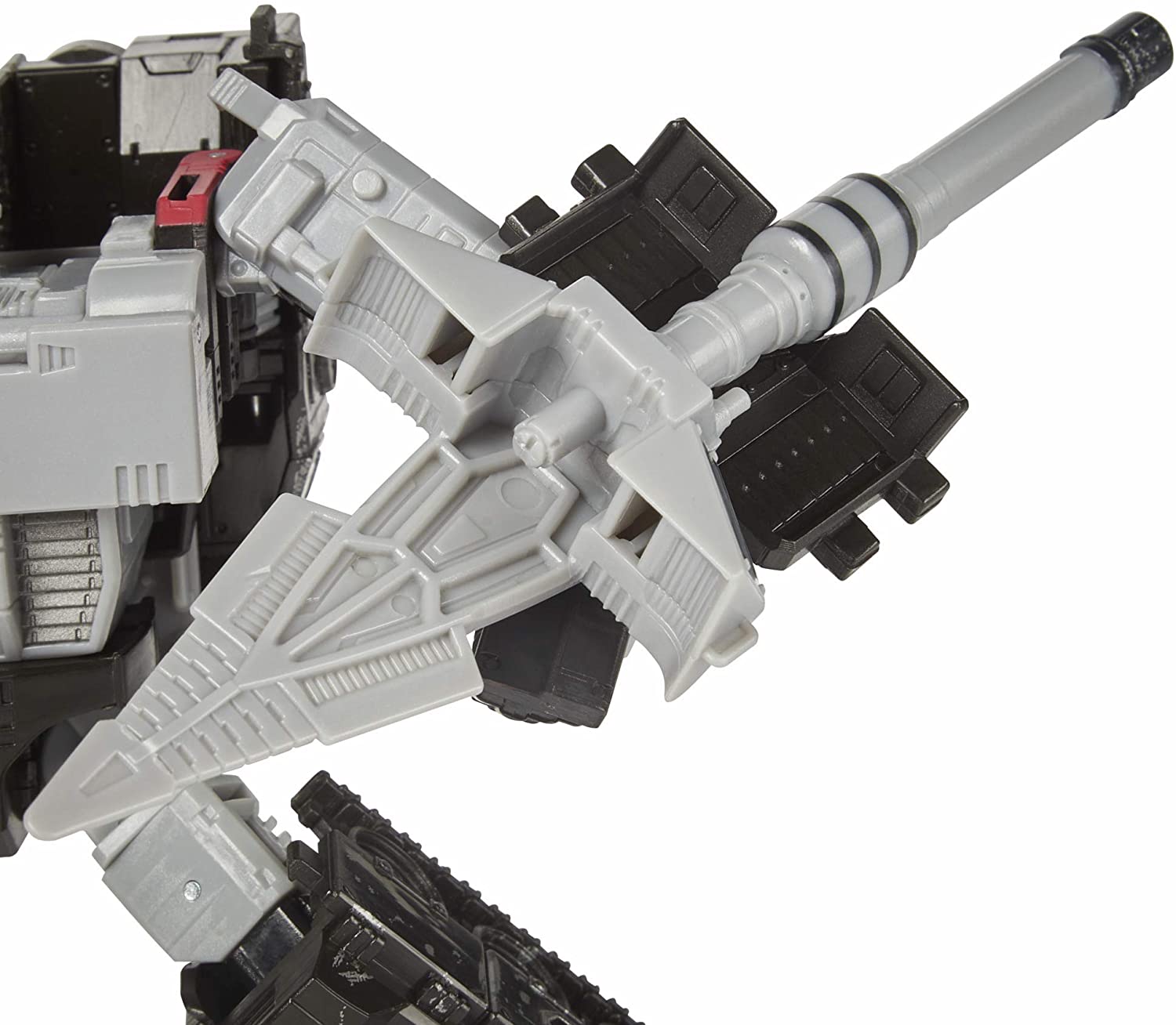 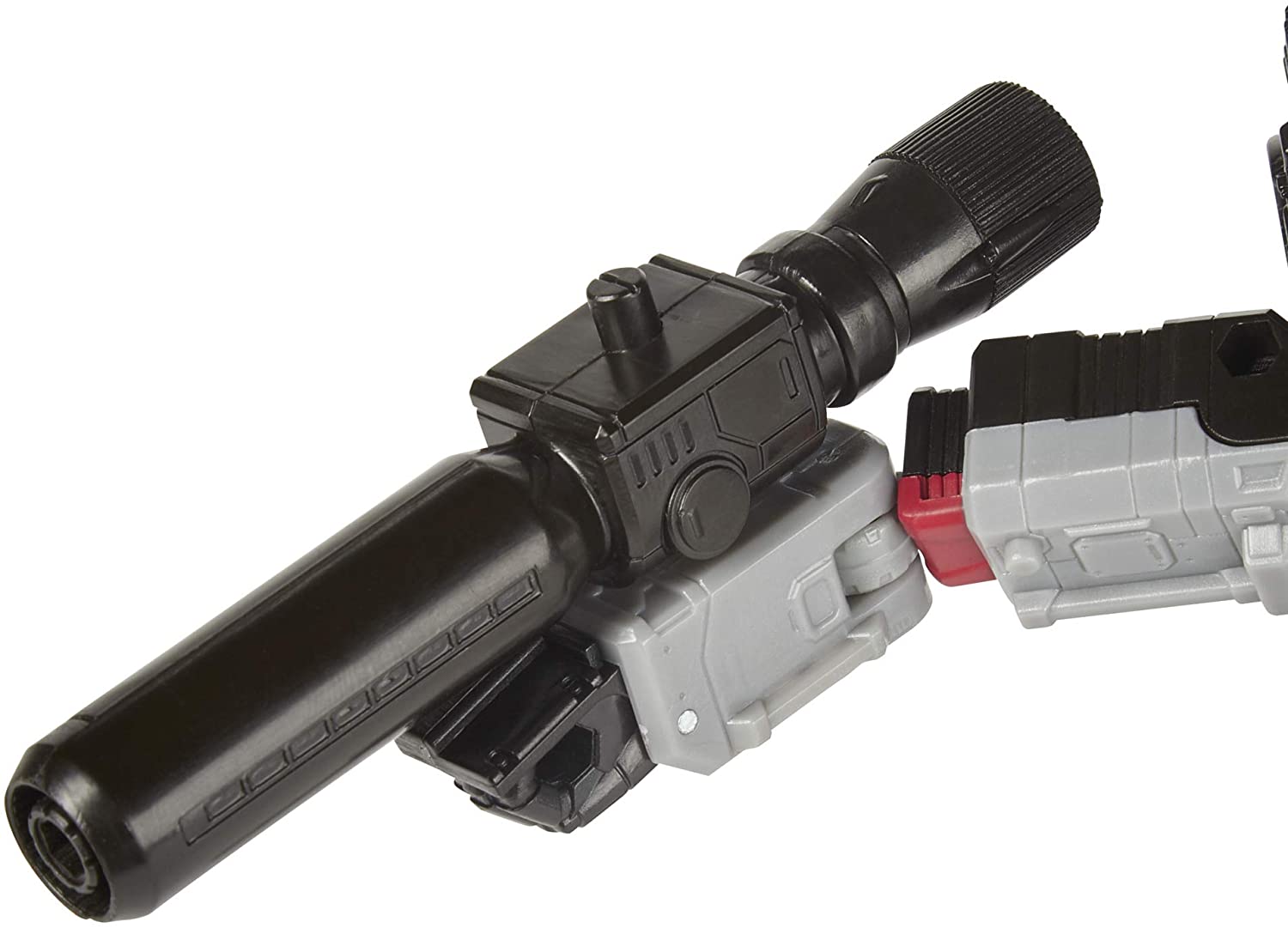 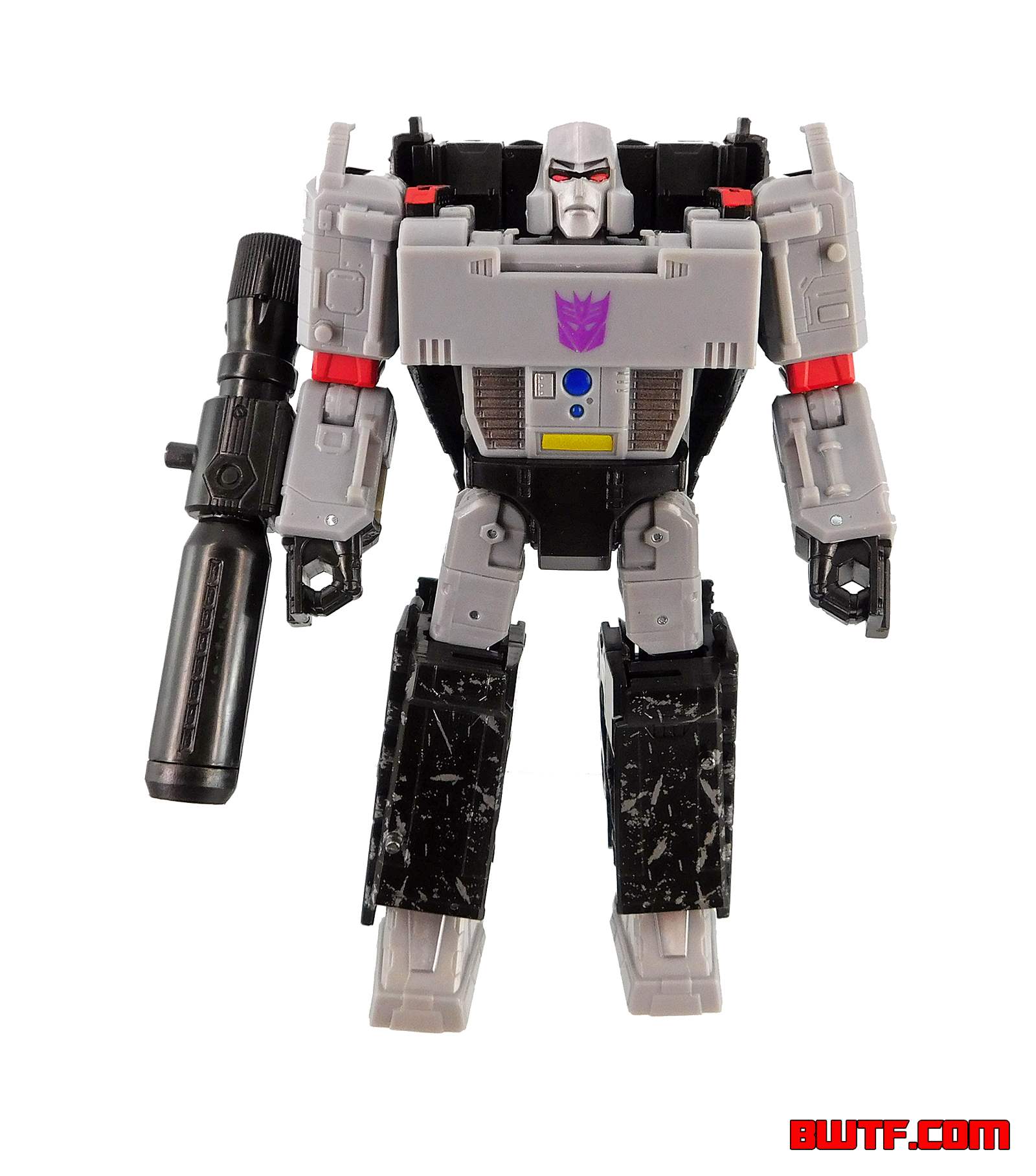 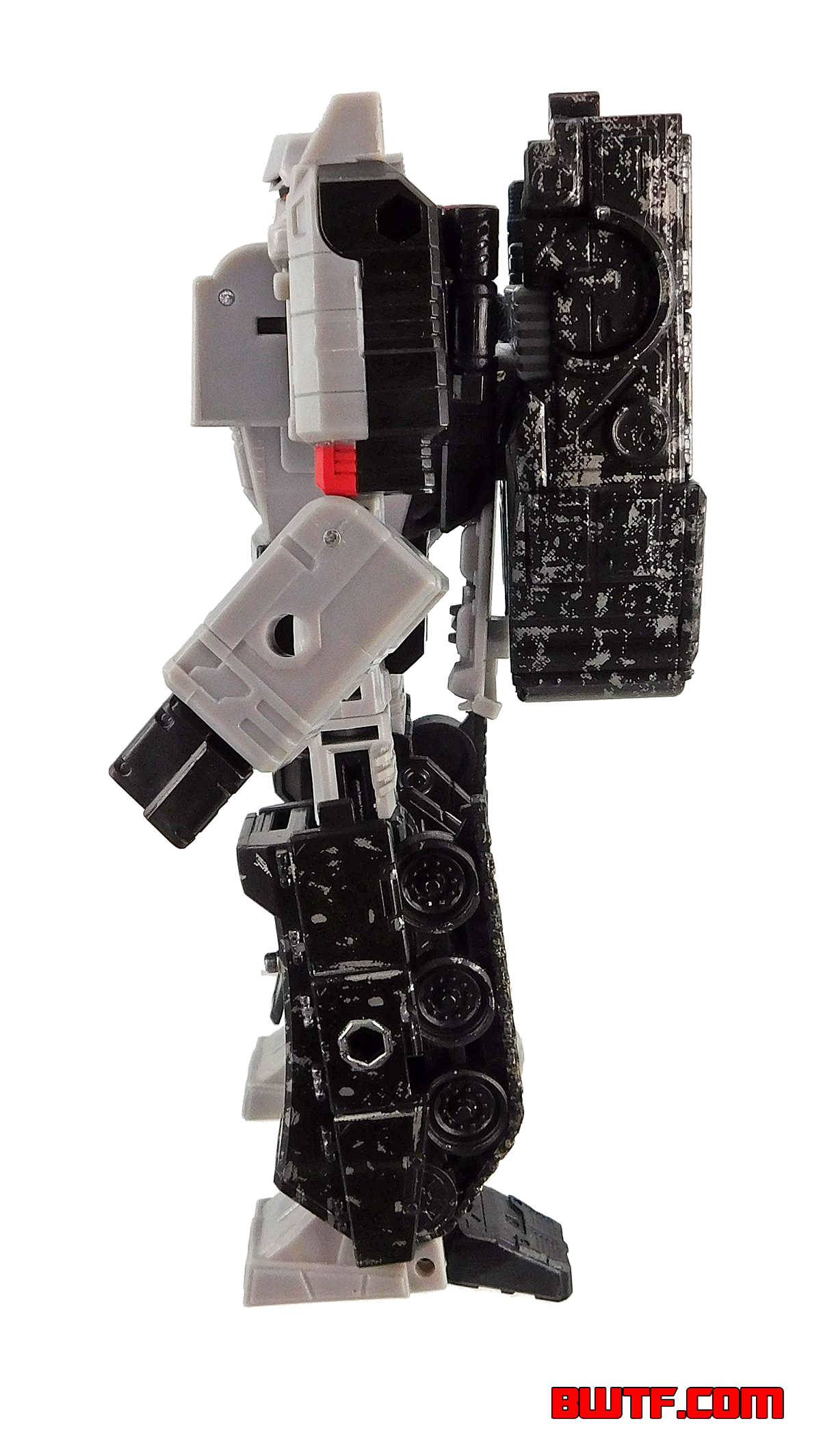 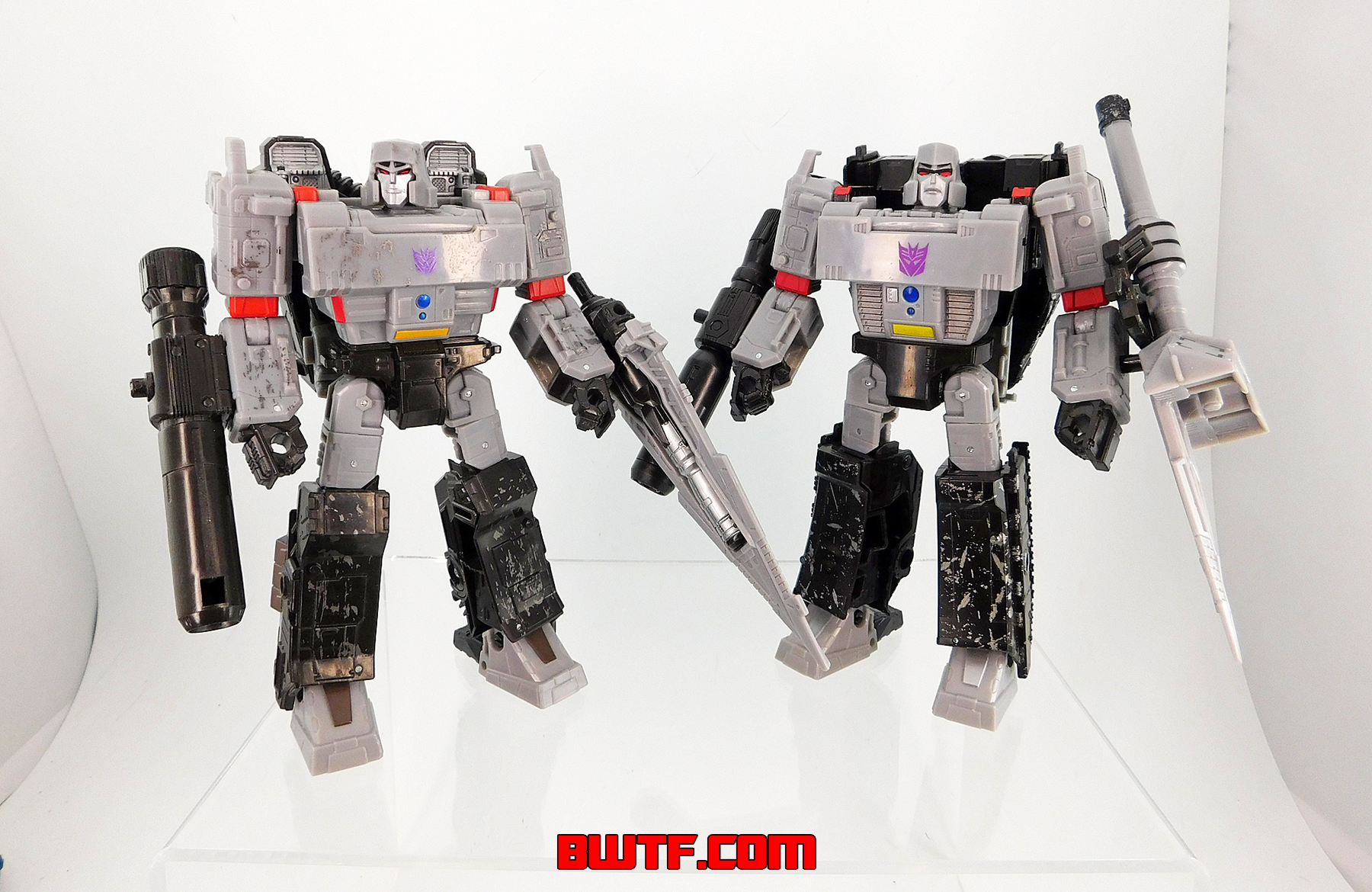 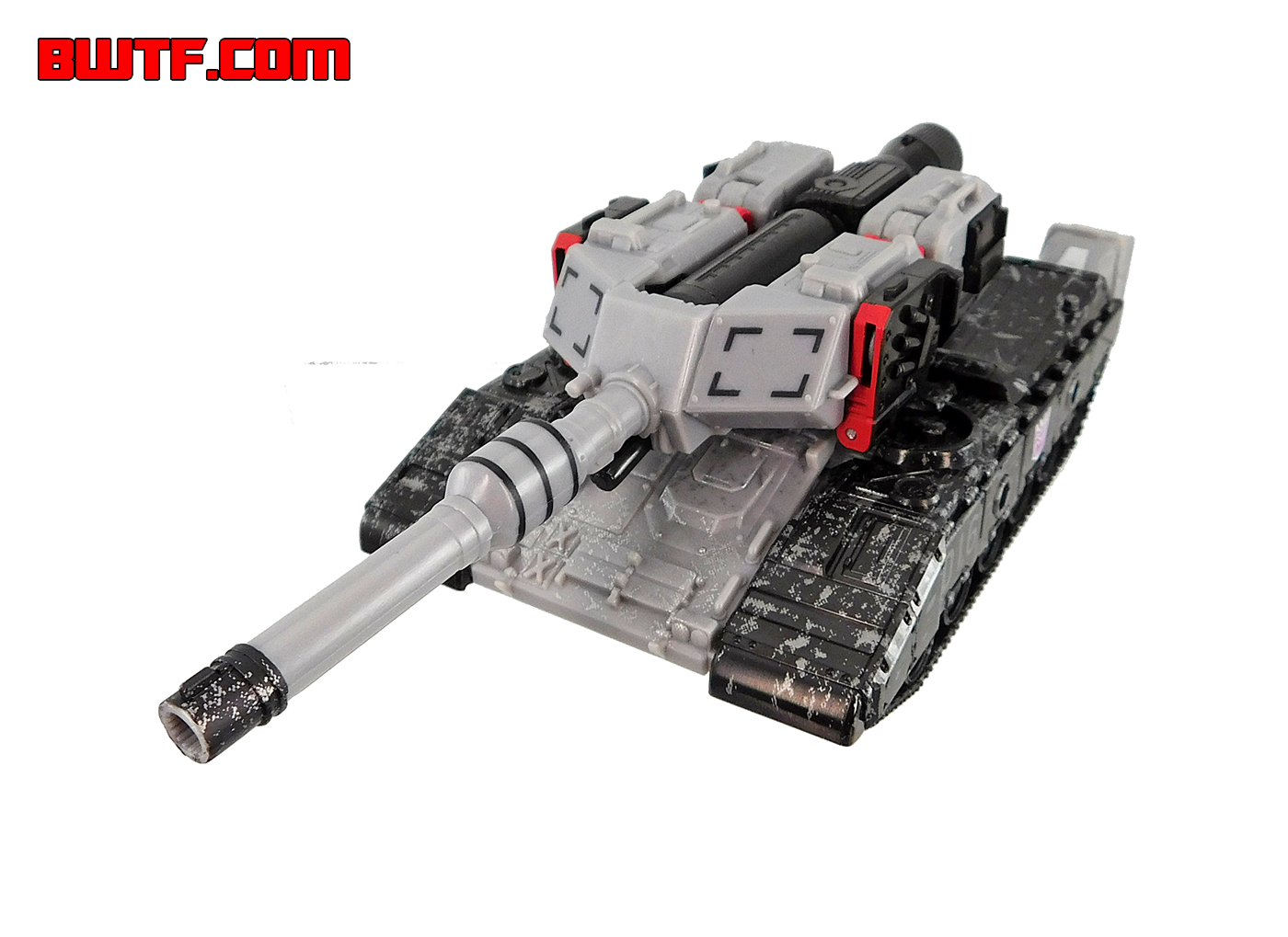 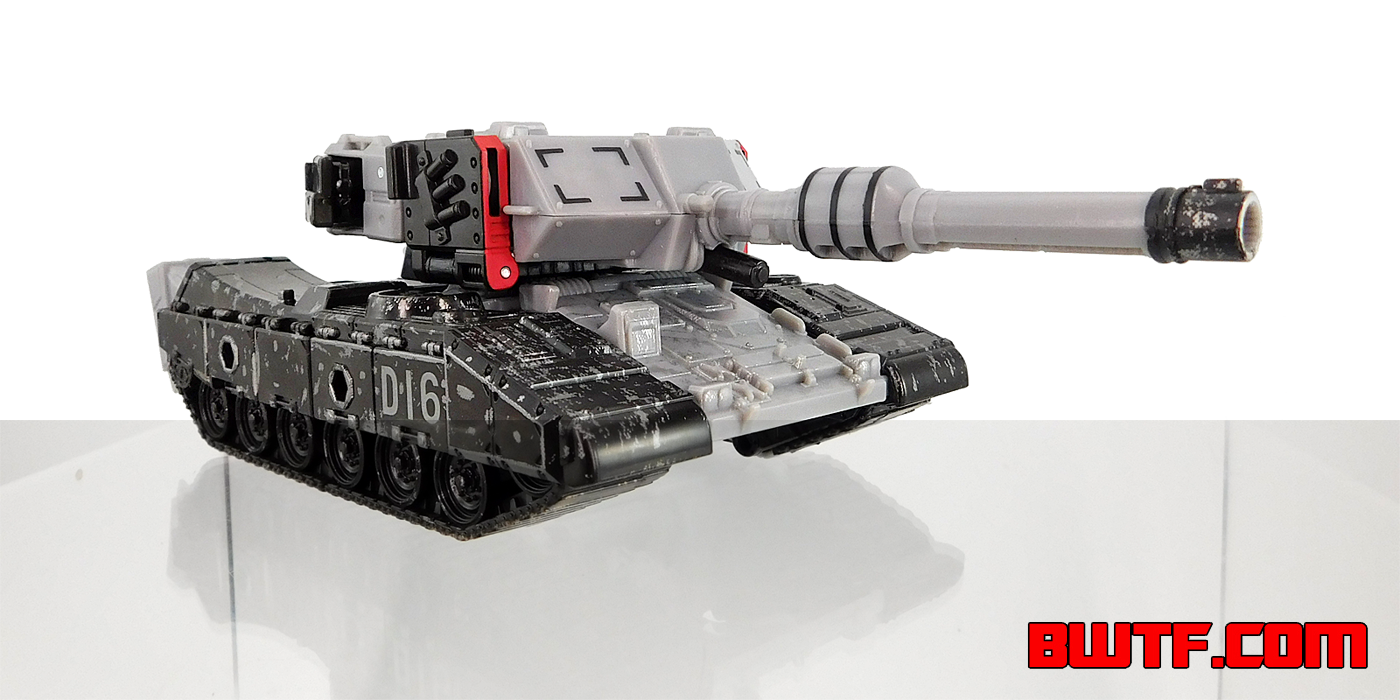