Official images and text below in italics are from Target.com:

Beastify the battlefield! Worlds collide when the Maximals and Predacons join the fight, coming together with the Autobots and Decepticons in an epic battle that will alter their destiny forever. Primal power floods the battlefield as the fierce beast modes of the Maximals and Predacons are unleashed!Unleash the primal power of the beasts with this Megatron (Beast) collectible figure, featuring a detailed beast mode with intricate dinosaur-inspired molded scales and articulated jaw with molded teeth…does anyone have a toothbrush? Toy converts into a Beast Wars-inspired T. rex mode in 27 steps. Figure's dino head and tail become his classic claw hands. Add laser fire effect by placing fire blasts accessories inside dino head (sold separately with other figures, subject to availability). Yeeesssss…Includes a Golden Disk card that reveals a possible destiny of a key character. Collect other Kingdom figures to reveal all 3 alternate destiny variants for each character! (Each sold separately. Subject to availability.)

In the early 2000's the Transformers brand was going through a transition. The Beast Wars era was over and the often controversial Beast Machines series was going full steam. Around this time, Hasbro sought to expand their Transformers offerings on toy store shelves and created a line of dinosaur-themed redecos. Many of these figures actually came from the Japanese exclusive Beast Wars Neo series, but the leader of these new Dinobots was a redeco of the original Ultra Class Beast Wars Megatron known as T-Wrecks. Now over twenty years after the fact Hasbro has released a redeco of Kingdom Megatron as T-Wrecks! This review will cover the changes made to this figure for this release.

This figure was first revealed on Target's web site in June 2021. Until July 25th it was a Target Red Card exclusive, but after that anyone could order it and in late July 2021 it began to hit Target store shelves. 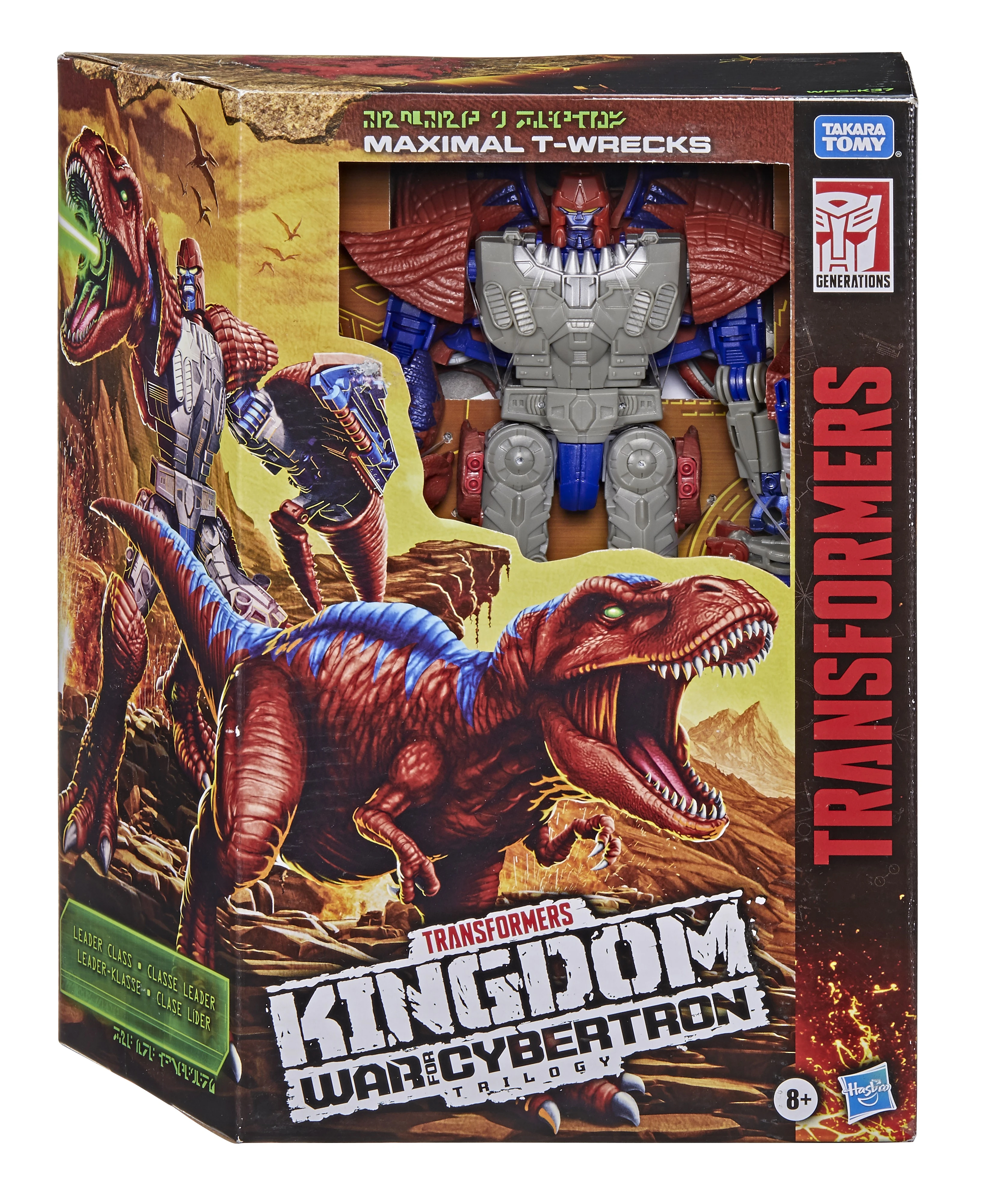 Packaging:
T-Wrecks is packaged in a large box, shaped like the same boxes from Earthrise. This means it has a rectangular shape with an angled section on the left. Unlike previous packaging, this one has a much smaller window revealing only the head and upper torso (and a bit of the shoulders) of the future. The right side has a vertical Transformers logo with the Generations logo above it. The beautiful part of the packaging is the artwork. In lieu of the larger window, the box has artwork of T-Wrecks in both modes. In front the art shows his beast mode and off on the angled side is T-Wrecks in robot mode firing his weapon from his right side "dinosaur arm". That said, this is not a simple repainting of Megatron's box art. The poses of both pieces of art are different and I was very surprised that Hasbro paid out for a brand new piece of art for this exclusive. The Kingdom logo is placed right over the beast mode. The artwork is gorgeous and I love how the norm is now having both modes featured on the package art.

The back of the packaging features T-Wrecks in both modes. The robot mode is standing on an intricate looking design. Above him is a modernized Maximal symbol. To the left are the words "T-Wrecks" and a 27 step transformation is called out under the robot mode.

Robot Mode:
There were no tooling changes made to the robot mode for this release. It is a straight up redeco - as it should be. The original T-Wrecks was a straight up redeco of Megatron, so this totally works for me. The deco on this figure is mostly a homage to the original T-Wrecks' deco. His primary colors are a deep red which is focused on the beast mode parts like his right "beast mode head hand" and his shoulder armor. Smaller parts such as the upper arms show some blue colors, which also call back to the original T-Wrecks. The main color change that really surprised me is perhaps one of the most dominant colors on the figure: silver. The torso, hips, thighs and parts of the left arm all feature a silver color which is...nice but it is nowhere near as rich as the metallic sandstone color used on the original. I would have much preferred that sandstone color as it is a very unusual color that is rarely used on Transformers toys and somehow feels more "organic" to me.

One nice touch in the deco is the use of bright orange on the hip blaster barrels. This is a fun callback to one of the original T-Wrecks' most striking colors: neon orange. It was a lot more prominent on the original but it is a fun touch.

All the joints on my copy of this figure are just as tight as those on my copy of Megatron. You can also still attach a Blast Effect in his mouth to make it look like he is firing from his "dino head" arm.

When I was transforming this figure I noticed the panels the come together to form the beast mode chest/belly area have a tendency to split apart as you manipulate other parts. Just press them back together and they should hold once you have the legs all covered up. Also, on my copy of this figure splitting the sections with the robot legs in half took a tiny bit more effort than I would have normally liked. I did not have this issue with my copy of Kingdom Megatron, so it may vary from figure to figure. 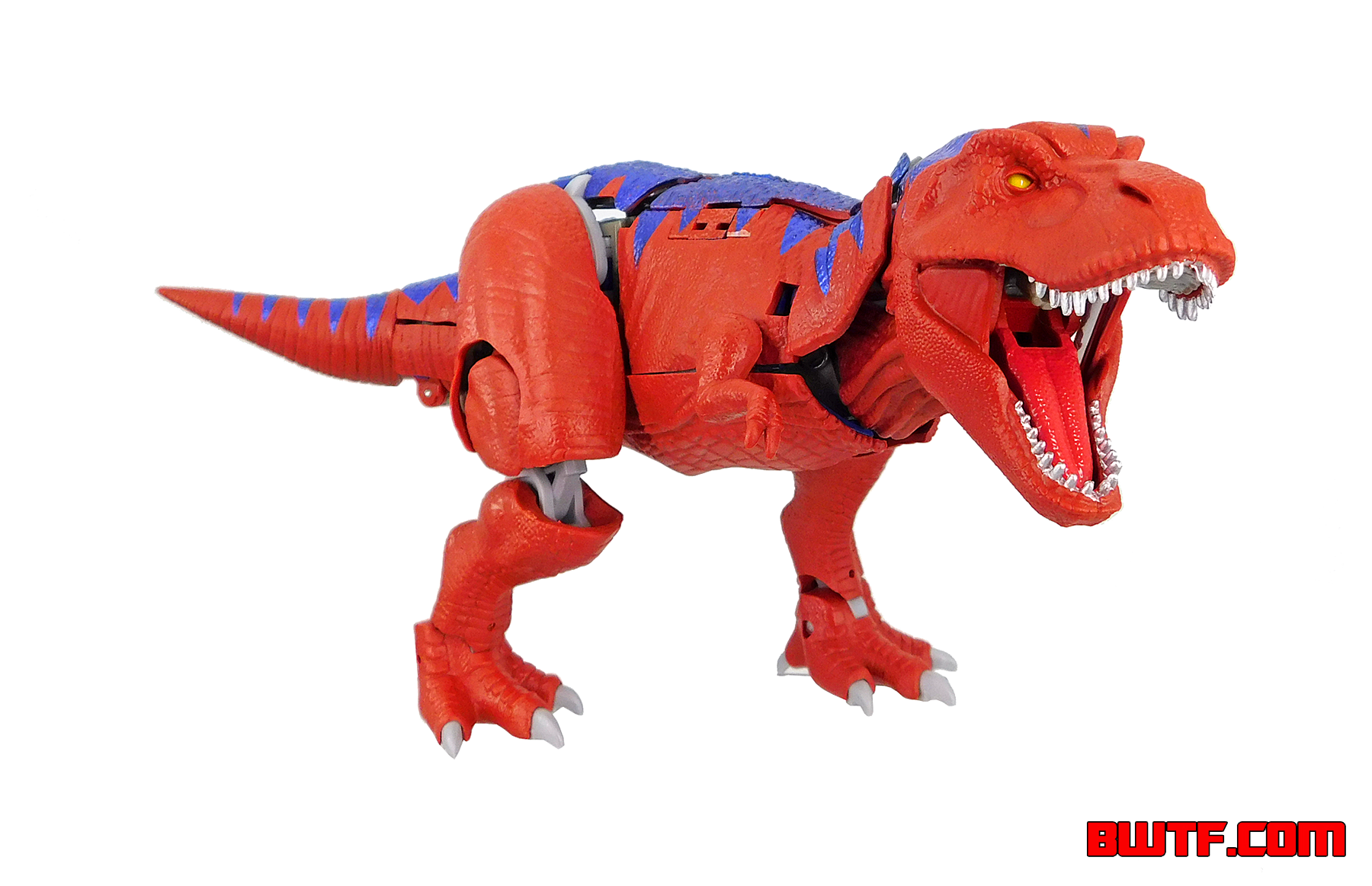 Beast Mode:
T-Wrecks' beast mode is a straight up redeco of Kingdom Megatron with no retooling and that totally works. I love this beast mode. From the "skin" texture to the beautifully sculpted parts like the head, this mode looks beautiful just on its own regardless of colors. Most of this mode is a beautifully deep red color that is meant to homage the original T-Wrecks, but I feel this shade is slightly darker. Running along the top of the figure from the head all the way to the tail is a beautiful metallic blue paint down the center extending out to stripes on the sides. I am kind of sad the designers did not use some type of paint op on the underside of the figure. This was done on the original using a beautiful metallic sandstone color and the same area was painted on Kingdom Megatron, but here it is unpainted. The teeth are painted silver and the eyes are orange, a departure from the original T-Wrecks who had green beast mode eyes.

All the joints in this mode are just as tight as those on my copy of Kingdom Megatron. However, the design cannot escape the way panels disconnect when you pose it a certain way. Sure they push back together just fine, but some folks may not love this (to me) minor issue.

Final Thoughts:
I was a big fan of the original Beast Machines era Dinobots sub-line. It was the first time many of those dinosaur-based sculpts were available in the United States and they were just darn cool toys. I also loved the idea that the legacy of the original Dinbots continued centuries into the future. Paying homage to T-Wrecks like this really hits the ol' nostalgia circuits perfectly. Just as I loved the figure this was based on, I totally love this one. Highly recommended!