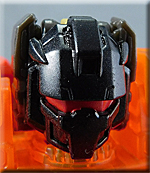 Very early on in the life of the Transformers line the toy line began to move away from the sole gimmick of transformation. Once figures like Combiners were introduced it became clear Transformers could be more than just a robot that changed from one form to another. In 1987 Hasbro and Takara took a bold step into a new play pattern by introducing Headmasters. Headmasters were Transformers whose heads detached and became smaller figures that could then pilot or ride the Transformers in beast and vehicle forms (or in a couple cases, their battle station or city forms!). Now almost thirty years after they were originally introduced the Headmaster gimmick has returned in a new form: Titan Masters!

Titan Masters focuses on the return of small robots to Cybertron that can unlock incredible power, and it is up to the Transformers to merge with them and harness those abilities and strengths. In some ways the story resembles "Armada" which had a similar conceit for the Mini-Cons. 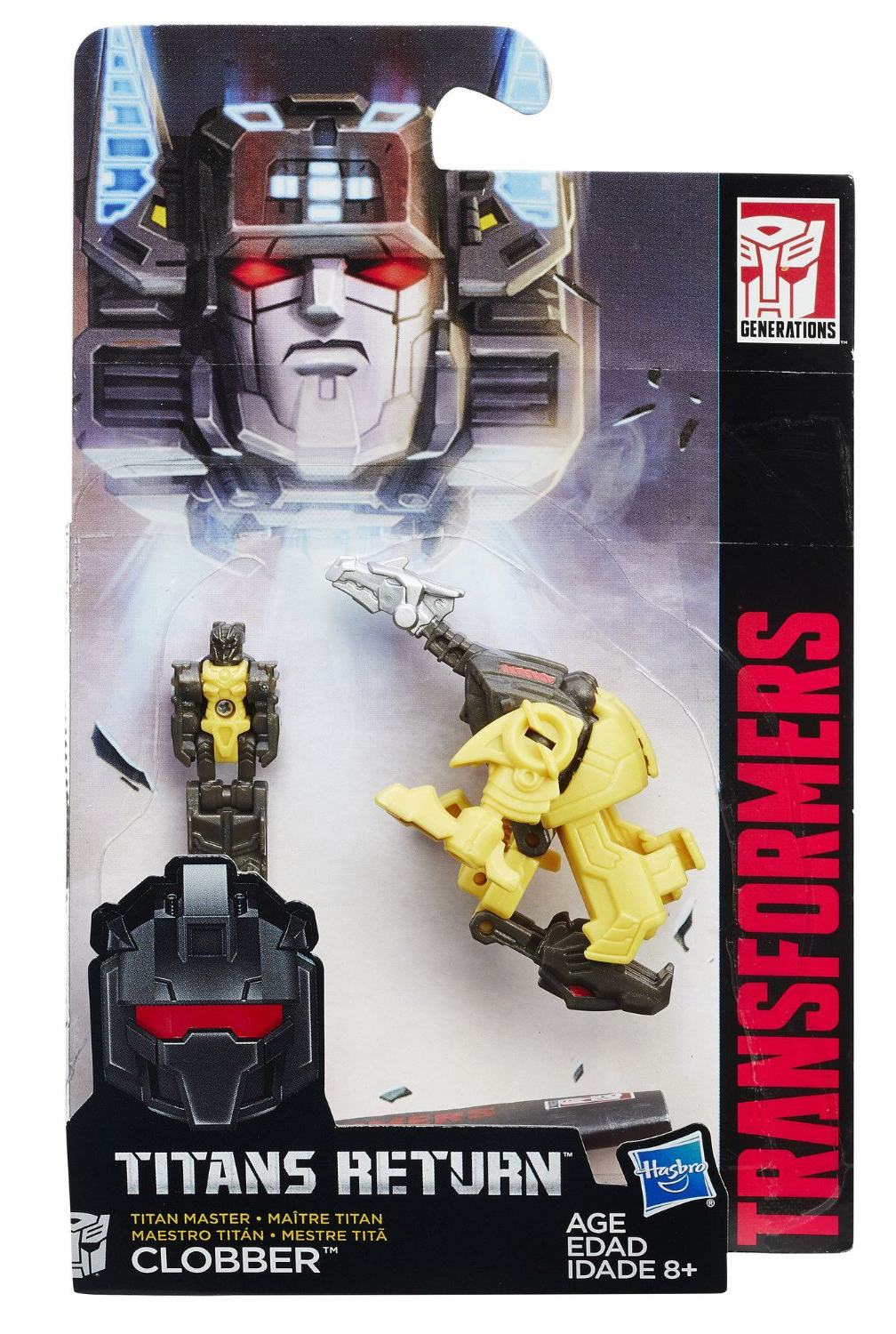 Packaging:
The Titan Master figures are packaged on a bubble card. The front of the card is universal across the assortment. It features Fortress Maximus' head floating above his body. To the side is a black bar with the "Generations" logo above the vertical "Transformers" logo. The insert in the bubble has a render of the figure in head mode. The head and vehicle are in the area under Fortress Maximus' head. The back is almost universal in that it features a diagram of the Titan Master "eco system" showing that the heads can attach to Deluxe, Voyager and Leader Classes. The difference however is in the bar code, which is specific to each character.

Clobber is a new character, but this figure started as someone much more familiar. When Clobber was originally introduced at Botcon 2016 as Grimlock, the Dinobot leader. It is likely the use of the Clobber name was more around marketing (avoiding confusion with "Robots in Disguise" Grimlock while also avoiding G1 fan wratch by turning the Dinobot leader into nothing but a head for a larger robot). I think there is enough wiggle room in the fiction (such as it is) that you can interpret Clobber being the Titan Master for Grimlock. This set is a redeco/retool of the Crashbash set featuring the same beast/weapon and basic robot sculpt with a new face for the head mode. 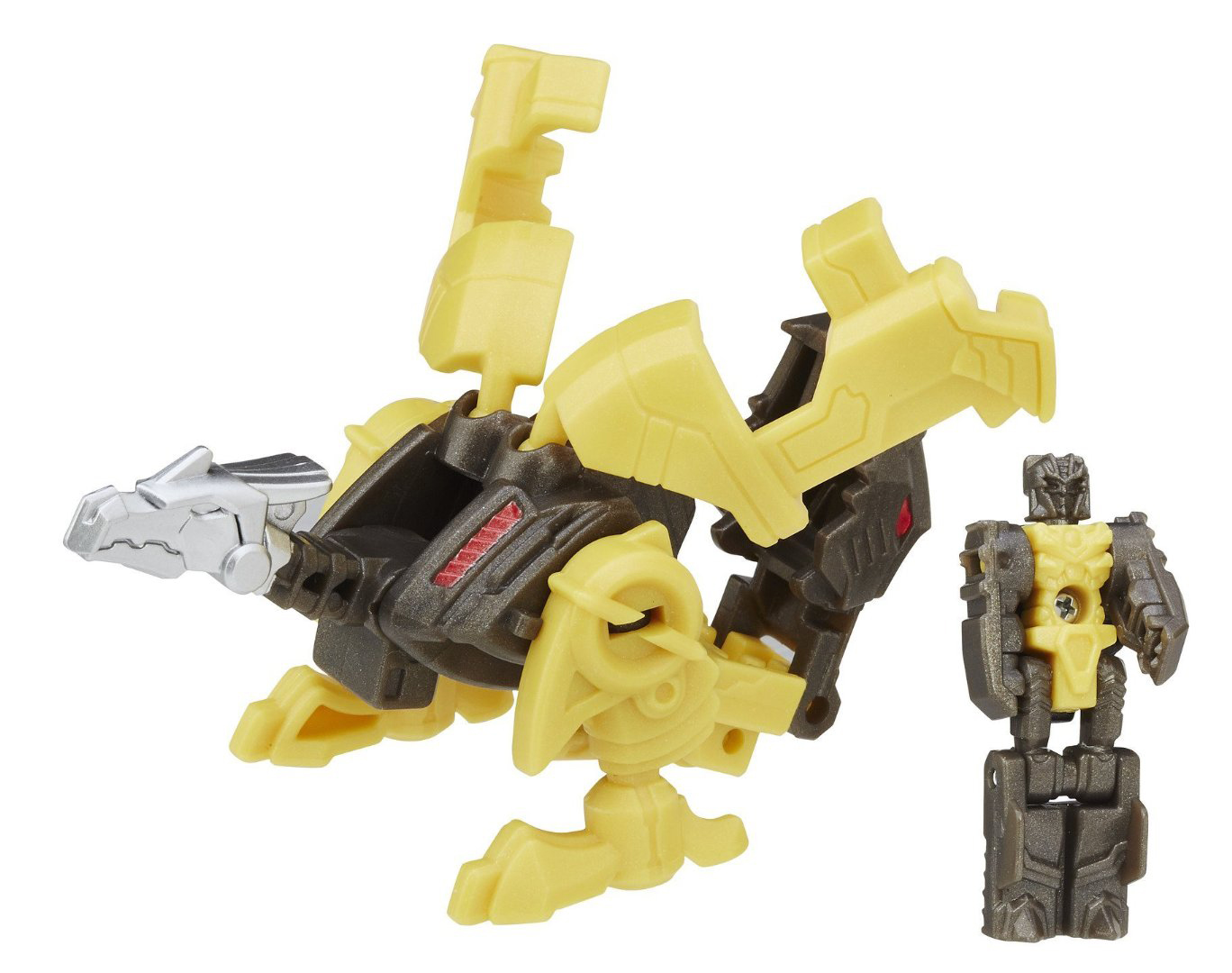 Robot Mode:
Clobber's robot form is the same sculpt as Crashbash's. Only the face on the back is different. The sculpt suits a character that would become Grimlock's head. A lot of the design looks sharp and jagged. The head has points that come to the front on either side of the eyes, a pointed crest and also pointed details on the torso. He has a somewhat medieval look about him which suits the theme of Grimlock very nicely.

Clobber is cast in yellow and metallic grey plastic. The metallic grey is really gorgeous and looks fantastic. Both these colors are direct references to Grimlock's traditional colors. Unfortunately there are no paint decos on the figure for this mode other than those appearing on the face on his back. I think he really could have used a touch of silver on the face and maybe on the torso, but unfortunately Titan Masters get secondary attention when it comes to paint applications.

All of the joints on my copy of Clobber are nice and tight, so no worries about functionality.

Transformation to Head Mode:
Push the arms down. Swing the legs up at the hips, then the knees. When attaching the head to a larger figure, I recommend having Clobber's head facing the same direction as the larger face.

Head Mode:
In head mode there is no doubt Clobber is meant to embody Grimlock. He has all of Grimlock's classic design elements including a crest in the center of his head, visor eyes that narrow at the edges and a distinctive mouthplate that flattens in the middle with jaw pieces on either side. This design also has horn-like designs on top of the helmet section, a detail that recalls some artist flourishes seen on the character in comic books. Overall the head mode is a beautiful sculpt that nails Grimlock's look perfectly.

While Clobber's robot mode did not get a lot of paint, this head certainly did! There is gorgeous metallic black paint on most of the helmet and mouthplate and the eyes are painted red.

Dragon Mode:
The dragon mode is unchanged from the previous release of this set. It still features a distinctive dragon/bird-like head in the front, two legs with blunted claws at the ends and two wings sticking up. The wings and legs are cast in yellow while the rest of the figure is metallic grey. The head is painted silver and the vent-like details flanking the base of the neck are painted red. Clobber can still ride on the back of the dragon without a problem.

Dinosaur Mode:
This mode is perhaps the most "Grimlock-esque" mode of this set. Between his large legs, small hands and large snout, there are definitely features here that you can associate with a T-Rex like robot. This mode winds up being mostly yellow, with the grey focused on the head, arms and rear section. His eyes are painted red and there is an Autobot symbol tampographed on the head. The end of the tail is painted silver. The colors look good though I would have preferred the yellow be a bit more of a gold color if this mode is meant to represent Grimlock in beast mode.

Weapon Mode:
The weapon mode is not the strongest form of this figure, but it works well as an accessory and I am happy the designers thought to include it.

Final Thoughts:
I have no issue with Grimlock becoming a Titan Master or Headmaster, but it feels to me like the Dinobot leader deserves a bit better than being relegated to a small set like this. I enjoy the play value in this set however. I also love the Grimlock head/face sculpt. Add on some gorgeous color choices with the metallic grey and black and I think this set is worth it, I just want a body for Grimlock too!