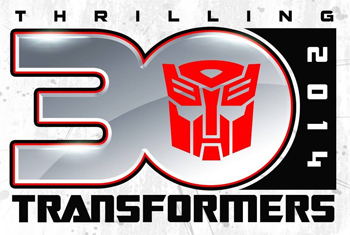 *Images with asterisks and text in italics from Amazon.com: 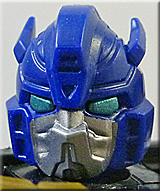 His new armor may be resistant to the laser fire of the Decepticons, but beneath it, Goldfire is the same robot he’s always been. Once known as Bumblebee, he had the chance to lead Cybertron to a new golden age, but now it looks like that chance has passed. With all that he’s built seemingly collapsing around him, all Goldfire can do is keep fighting to save all that he can. Convert, arm and attack with all the Transformers action you can handle! This Goldfire figure might look familiar, because he used to be known as Bumblebee. He's still just the Autobot to create maximum trouble for his Decepticon enemies (other figures sold separately). In robot mode, your Goldfire figure has 2 blasters that combine into one for an even more powerful weapon. But when he needs to zip around and do recon, convert him to sports car mode! Whatever mode he's in, his enemies will think twice before taking him on! Transformers and all related characters are trademarks of Hasbro.

Following up on the Summer 2013 release of Deluxe Class "Generations" figures based on characters from the IDW Publishing comic books, late 2013 saw the release of a new wave of "Generations" figures packaged with comic books. One of these releaess is "Goldfire", who is a new incarnation of Bumblebee in the comic book series. The figure is a redeco and retool of the previous IDW Publishing Bumblebee figure, so check out that review for a detailed look at the sculpt.

Packaging:
The new style of "Generations" packaging features a card back with the G1 inspired "grid" pattern and a small "Transformers Generations" logo at the top. Most of the "art" in the background is provided by a cover of a comic book exclusive to this toy. In this case it's the 18th issue of the "Robots in Disguise" comic book with a printing created just for this release. On top of that is the figure in robot mode with its accessories. It's a nice packaging design, but I think it would've been better if the "Transformers Generations" logo was larger on the card or even printed right on the comic book. 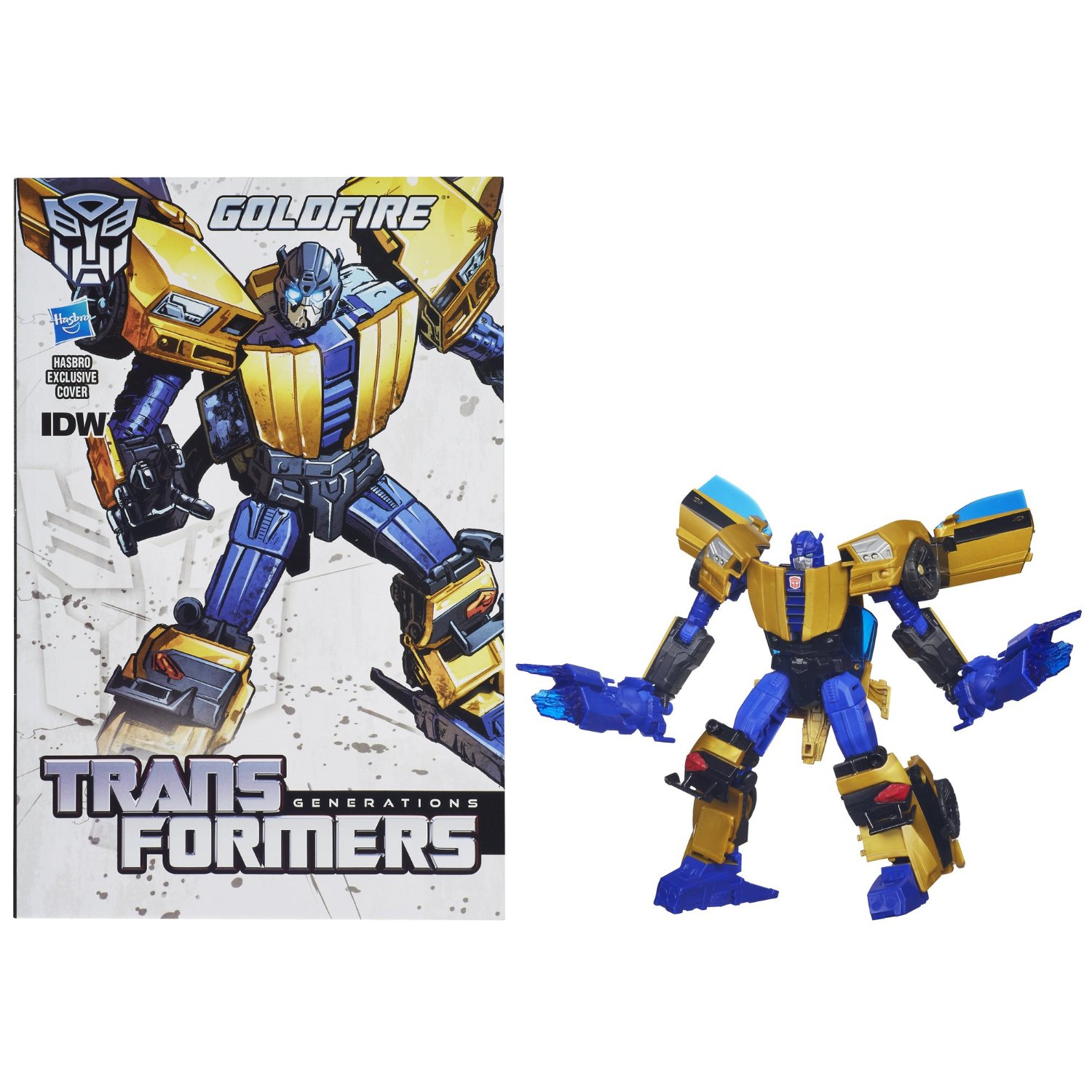 Robot Mode:
In the "Generation One" era, Bumblebee was rebuilt into a new body and took on the name "Goldbug". He still looked similar to the original Bumblebee. He transformed into a Volkswagon Beetle, in robot mode his feet were made of the front of the vehicle, his torso was the cabin section of the vehicle and even the head design was essentially the G1 Bumblebee toy head design with extra bits added on to it. True to the name, his primary color went from his iconic yellow to a more attention grabbing gold.

By virtue of being a redeco/retool of the IDW Bumblebee figure, this same theme carries over to Goldfire, who for all intents and purposes is the modern day version of Goldbug. The retool is actually a full on head swap with a new head sculpt. This head sculpt is based on his appearance in the comic book, which in turn took inspiration from G1 Goldbug. It features a central crest, "horns" on the top portion of the helmet section and vent-like sections on either side of the head. He has large eyes ad a mouthplate which has some beveled designs on top of it (instead of being a flat mouthplate like Optimus Prime's). The mouth partly resembles the one used on the mouth of the live action movie Bumblebee, but is much more angular looking. I actually find myself preferring this head sculpt over the previous one. It acts as more of a callback to G1 Bumblebee and Goldbug and it gives him a less friendly, yet more formidable appearance.

The rest of the sculpt is the same as the previous release, down to the weaponry. However, what makes this guy different is an amazing deco! Goldfire is cast primarily in gold, dark blue and black plastic. These colors are all inspired by G1 Goldbug and they look great together. The gold makes up much of the armor on the figure including his chest, back, shoulders and lower legs. The blue is used on smaller sections like his head, upper arms, thighs and feet. Balancing out those two colors is black plastic which you'll find on his forearms and waist/hip area. On their own, these plastic colors really present a strong visual impact and they pay nice homage to G1 Goldbug. One of the things I didn't like too much about the previous figure was how the yellow color looked a bit cheap. The gold in this form is the opposite. It looks bold, especially along with the blue and black.

Goldfire's weapons have been cast in dark blue and translucent blue plastic. There are no paint applications on them, but they really don't need them. They look great separate and combined.

When I first took Goldfire out of package, I would've sworn he had more deco applications than Bumblebee, but in fact he has less, yet somehow he still manages to look awesome. The paint applications have all been putin similar places to Bumblebee. For instance the outer edge of the forearms are painted gold to match the gold plastic (just as Bumbebee's were painted yellow). The face is painted silver with light blue eyes. The lower legs have black and red used on the knee armor. There's also a tampographed Autobot symbol in the center of his chest. Where he winds up losing paint applications are his feet, which have circular, headlight like details sculpted in them but aren't painted on this figure (whereas they were painted on Bumblebee). What's important here is not so much the number of paint applications, but rather how well they work together on the figure and how strong the colors are.

All of the joints on Goldfire are really nice and tight and the weapons combine without a problem. There is however one significant issue, and this knocked the figure down from a "Highly recommended" to a "Recommended" because it's pretty significant: the 5mm holes on the underside of the forearms are too big on my copy of this figure. When you put a 5mm peg weapon in, they drop right out. They don't even hang loosely. I don't know if all Goldfire figures out there have this issue, but mine certainly does. 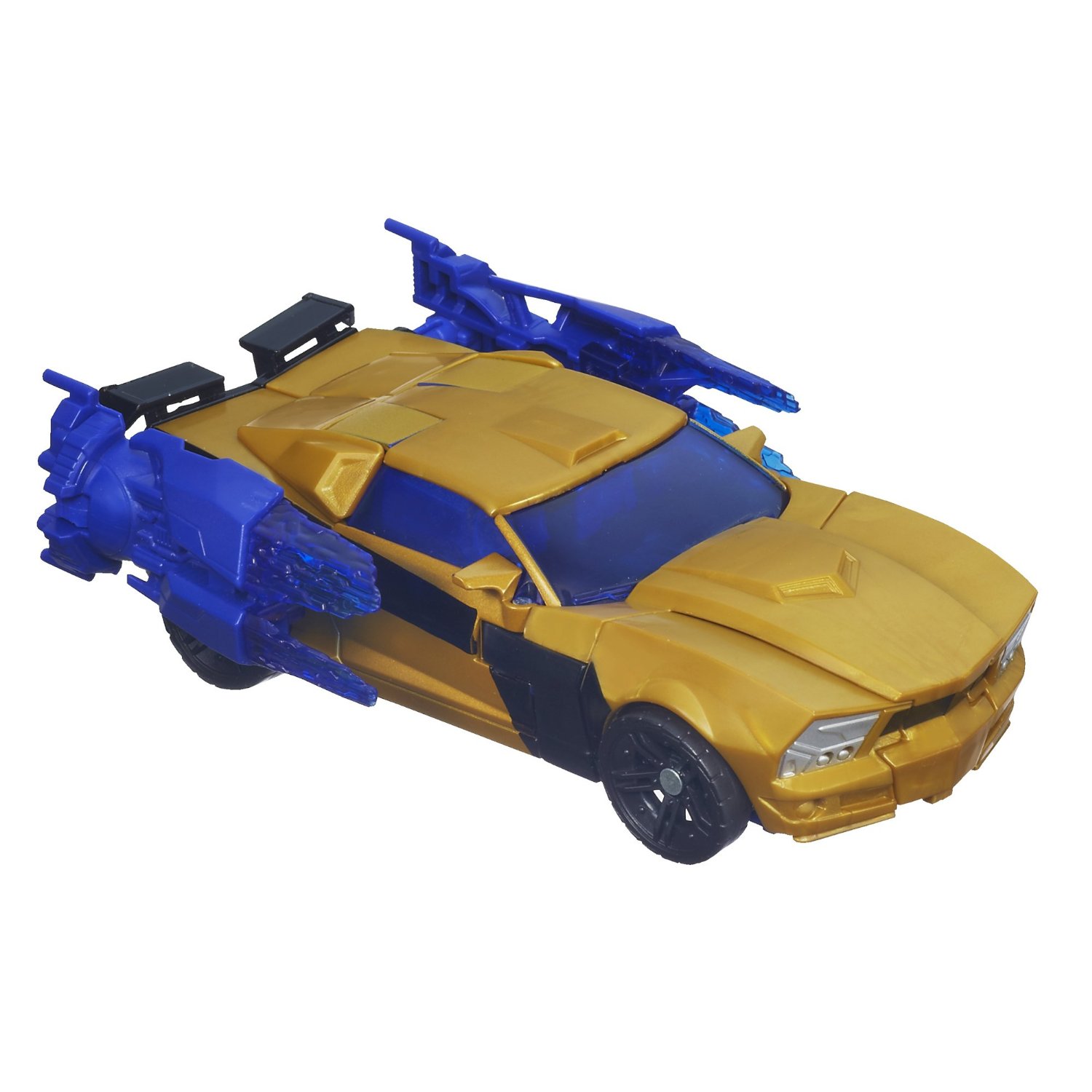 Vehicle Mode:
In the vehicle mode there are no mold changes. It's a straight up redeco and it's gorgeous. A gold car may sound gawdy, but the gold color here is a darker shade and it is contrasted with dark colors overall which help ground it visually. Most of the armor from the robot mode becomes the outer "shell" of the car here so it's mostly gold. Black paint is used for bold stripes running along the sides of the vehicle leading over the rear wheel well. It's also used to paint the spoiler and the area around the rear lights. The rear lights themselves are painted red, boldly contrasting against the black. The windows are all cast in dark translucent blue, echoing the dark blue plastic in robot mode. The front end uses black on the grille and silver on the headlights. The sides of the wheels are not painted, but in this case I don't mind. I'm not sure silver would've worked here given all the gold on the vehicle. Instead, I think he winds up looking great with the black wheels contrasting against the gold plastic.

The connection points on the sides of the vehicles work perfectly, so no worries there. The four wheels roll without a problem. Functionally this vehicle is identical to its predecessor while paying homage to G1 Goldbug all at the same time.

Final Thoughts:
It kind of amazes me how much I prefer this figure over the previous one. It's not that the previous Bumblebee figure was a bad toy, it's just the deco and head sculpt on this toy appeal to me a lot more. If it weren't for the aforementioned forearm/5mm port issue I'd be highly recommending this figure. Instead I'll say it's a superior deco to the previous version and it's a fun toy - but look out for the issues with the forearms and don't use excessive force when transforming it (but you knew that didn't you?).