Official images and text below in italics are from Amazon.com: 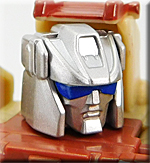 The Autobots and Decepticons use Prime Masters to wield the incredible powers of the legendary bots who shaped the universe: the Primes. Prime Masters carry the spark of a Prime, allowing them to share a Prime's godlike ability with other bots. How will the rule-breaking Autobot Outback wield this epic power? Anything is possible and everything is at stake when the Power of the Primes is unleashed! Transformers Generations Power of the Primes Legends Class figures are 3.75-inch-scale figures. When this Legends Class Autobot Outback figure is in truck mode, a Prime Master figure fits inside. Prime Master figure not included. Each sold separately. Subject to availability. Figure Specs: Legends Class Autobot Outback Modes: robot, truck Converts in 7 steps Transformers and all related characters are trademarks of Hasbro.

In 1986 it was clear the Transformers toy line was a hit. Many of the toys that made up the first two years of the line had been either created by Takara previously or licensed from other companies. However by year three Hasbro and Takara had to develop new toys, but in true cost saving fashion they also found ways to reuse pre-existing sculpts. To that end, several of the "Mini-Bots" released in 1986 were retools of previous releases. One of these was Outback, who was a retool and redeco of the G1 Brawn figure. Now, history has repeated itself with the release of a modern Outback figure which is a retool and redeco of the Legends Class Brawn from "Titans Return"! This review will focus on the changes made to the Brawn sculpt for this release. Check out my original review for a detailed look at the sculpt.

Outback was featured on the G1 cartoon a few times, and he made a few appearances in comic books over the years. Over the years several figures have been released that served as homages or new forms of the character. Due to trademark issues at the time he was sometimes referred to as "Fallback":

Packaging:
Outback is packaged in blister card style packaging. The card features the "Transformers" logo in the front against a black background with the "Generations" logo above that. most of the card is taken up by Outback's artwork with the character's weapon attached to his arm. The art is colored in a beautifully painted fashion that recalls the artwork from G1 toy packaging. On the insert inside the bubble is the "Power of the Primes" logo. The Outback figure is in robot mode inside the bubble with the collector's card. The insert in front shows a photo of the figure in vehicle mode with the name "Autobot Outback" printed next to an Autobot symbol. The back of the packaging features a grey grid with CG renders of the figure on top in both modes. Outback's cosell is Quintus Prime.

Each "Power of the Primes" figure from the Legends Class up includes a collector card featuring character art and a description of how they are powered up by a Prime. In my copy of the Outback figure I received the "Outback Prima" card which says Outback leads rebellions across the universe!

Robot Mode:
In Generation One, the Brawn sculpt had its chest, arms and head changed to create Outback. This time out the change is a little less grand. Outback features a new head sculpt, and that is the only retooled part. That said, the sculpt is fantastic. The original Outback's head had some exaggerated features with a large helmet section and huge visor eyes. The proportions on the head have ben altered to make it look a bit more normal. However it still features the design elements of G1 Outback's head including a helmet that wraps around the sides of his face, a large central crest and visor eyes. The designers did a fantastic job on this sculpt and it looks great.

The rest of the sculpt is the same as Brawn's including the slightly curved, vertical shapes on the torso. However, the deco on this figure offers some further callbacks to G1 Outback. Outback is cast in beige, brown and black plastic. The brown makes up the torso and waist area. The beige color is used on parts like the arms and legs (and the back). The colors match up well with G1 Outback, though the beige on the original figure seems a tad darker.

I was happy to see that the deco pattern on this figure is very different from Brawn's. Silver paint is used on the head and the forearms. This calls back to G1 Outback who had silver paint on his head and silver arms. The eyes are painted blue, which calls back to Outback's G1 cartoon model. Some brown is used on the lower legs, which helps break up the potential visual monotony of the beige plastic. Perhaps my favorite deco point on this figure is found on the torso. There you will find a tampograph with four squares forming a larger square. Inside are distinct patterns including a set of circles and vertical lines with a yellow background. This tampograph is based on a sticker found on G1 Outback's chest and it really helps distinguish this figure from its predecessor while connecting it to the original. I really like the deco on this figure and I am happy the designers took care to make it different from Brawn's.

All eleven points of articulation on my copy of this figure are nice and tight. He can even hold up a Prime Master weapon without a problem! While he can hold G1 Outback's weapon, it is not a very snug fit and it can be shaken loose fairly easily. You can instead use the accessory included with the figure. This can serve as a handheld weapon or attach to the sides of the forearms as a shield/weapon.

Vehicle Mode:
Outback's vehicle mode is the same as Brawn's, with no retooling. However it still remains one of my favorite Legends Class vehicle forms from the last couple of years. The weapon/shield from the robot mode can still be used to cover the back section or be attached to the top as a weapon rack (with a spare tire on top of course). In Outback's case this is especially appropriate since he was the only Generation One "Mini-Bot" to have a weapon (which would attach to the top of his vehicle form)!

Final Thoughts:
Ever since the Legends Class Brawn figure was released, fans felt Outback would be a natural retool/redeco of the figure and they were right! Hasbro did a fantastic job with this figure. It manages to pull off being Outback even with only a new head (instead of both a new head and torso). If you're into the Legends Class of figures or love the Mini-Bots, this is a must have! Highly recommended!