Night Slash Cheetor is one of those few toys in Universe that retains the same identity as the mold he is based on. In this case, this toy is a redeco of Beast Machines Night Strike Cheetor. 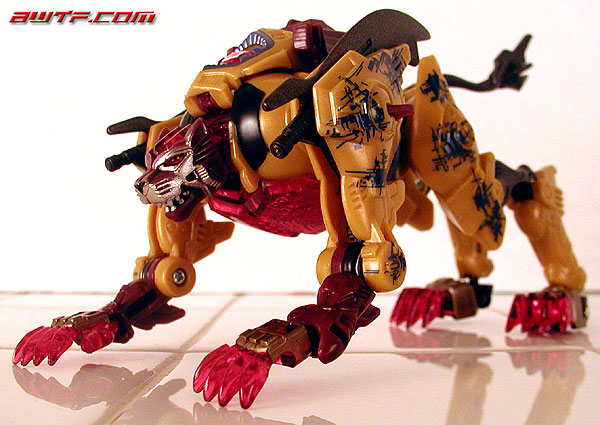 Beast Mode:
Cheetor was originally intended to represent a fully techno-organic cheetah. However, years after its initial release, it is interesting to note that there is little if any "organic" type detail on the toy. In fact, for the most part, this is a very tech looking cheetah. Keeping in mind that this toy was developed over five years ago, it is very cool to see just how well the sculpt has held up to the test of time. It is quite intricate and sleek. The overall shape is fluid and dynamic, with sharp angles such as those on the upper forward legs and rear lower legs complemented by smooth, rounded parts such as the chest and rear upper legs.

Smaller details can be found in the form of arious shapes from circles to triangles on the legs and main body. A series of tubes runs along the center of the body down the sides. The beast mode head is awesome, incorporating natural feline details such as the teeth and whiskers, but making them mechanical looking. Totally tech details can be found in the form of a rocket pack on his back and his tail, which has a gun barrel and blade at the end. On the top of the beast mode is Cheetor's Spark Crystal. Set in translucent red, the crystal is actually a Beast Wars Maximal Spark Crystal. On top of the Crystal is a tampographed Autobot symbol.

Cheetor's color scheme is completely different than the Beast Machines version. His primary color is a dark, metal flake mustard color, meant to evoke a cheetah's more natural color, but retain the allusion to him being a mechanical life form. All over the arms and legs are metallic blue circuitry patterns. What's nice is that they're not in concise patterns, giving it a rather artistic look. Dark red and dark brown are used for smaller parts such as the head and rocket pack. Metallic gold is used for parts of the feet while some metallic silver is sprayed on the face, creating a nice effect in contrast with the translucent red eyes. The four feet are also translucent red, the perfect color to go with the rest of the toy.

Cheetor has seventeen points of articulation in this form. These are mostly centered in the legs, but one interesting one is the head, which can turn side to side. As you do this, a tab in the back pushes the upper part of the head up a bit so he looks like he's baring his gums/teeth in a snarl. A really nice, simple effect.

Robot Mode:
Cheetor's robot mode is a wonderful example of the very different design direction Hasbro attempted to make in the Beast Machines era. It began with the Beast Wars era where robots didn't have to be these symmetrical completely humanoid forms. In this case, Cheetor's legs are extra long with an odd avian backwards leg slant, different than one would expect from a Transformer that turns into a cheetah. However, his clawed hands and feline face give that away easily. The face design is great, with the area above the mouth shaped like the whisker sections of a feline's head and his nose is also very feline like.

Like the beast mode, this form is meant to be sleek looking and it works. While they may seem simple at first, the leg design is actually fairly complex. The upper legs for instance have layers of armor sculpted in. Each is angled comign to fine points. The lower legs have smooth designs as well as angled designs on the back. With the backward angled design, they are very different and sleek looking at the same time.

Some of the best sculpted detail can be found on the upper body. The chest and abdominal area are all on one translucent red plate. The chest pieces have circlular and tech patterns sculpted in. The abdominal area has four ovals that look like ab "muscles" inset. The tubes mentioned in the beast mode review continue here to form the upper part of the waist here.

With swords in hand, you can press the Spark Crystal on his back to activate his slashing feature (hence the name). This also work even without the swords in hand as it makes him look like he's pumping his arms as he's running (which, as fans know he did a lot in Beast Machines). Cheetor has twenty two points of articulation including four in each arm. This allows for some nice poses, and the large feet allow for good balancing.

Metallic blue and metallic silver are more present in this form. The blue is on his chest and waist. His face has silver on it. The robot head uses translucent red plastic for the eyes along with light piping. All his colors work together perfectly in this form and allude to the cheetah colors of his previous forms.

Final Thoughts:
Night Slash Cheetor has a fantastic deco that I find superior to the original's. Between the two, I recommend this one more. This is the case of Universe making a cool toy even cooler.