Official images and text in italics below are from Amazon.com:

The war between heroic Autobots and evil Decepticons continues on the Bumblebee Cyberverse Adventures animated series! As a powerful new threat targets Cybertron, it is up to Grimlock and his new friends, the Dinobots, to unite and save the planet! Discover the unique powers and skills of each Bumblebee Cyberverse Adventures character, and see how those powers will be used to defend Cybertron… or threaten it. Volcanicus harnesses the power of pure energy for an Energon Armor-Up! Power up the Volcanicus figure by pressing the level on the figure’s feet to automatically attach Energon Armor. Figure converts from robot to dragon mode in 12 steps. Pull out the weapon accessory in the last conversion step to activate the Twist-N-Change feature. Kids can collect other Ultimate Class figures (each sold separately, subject to availability) to discover more exciting characters from the Transformers Bumblebee Cyberverse Adventures series! Transformers and all related characters are trademarks of Hasbro.

The fourth and final season of Cyberverse debuted in November 2021. This season introduced a team of Dinobots who would wind up following Grimlock as their leader. When this team is exposed to the Enigma of Combination, they gain the ability to merge into Volcanicus! This is of course an alt-universe version of the Generations Combiner of the same name. This figure represents the combined form of the Dinobots with an alt-mode of its own! 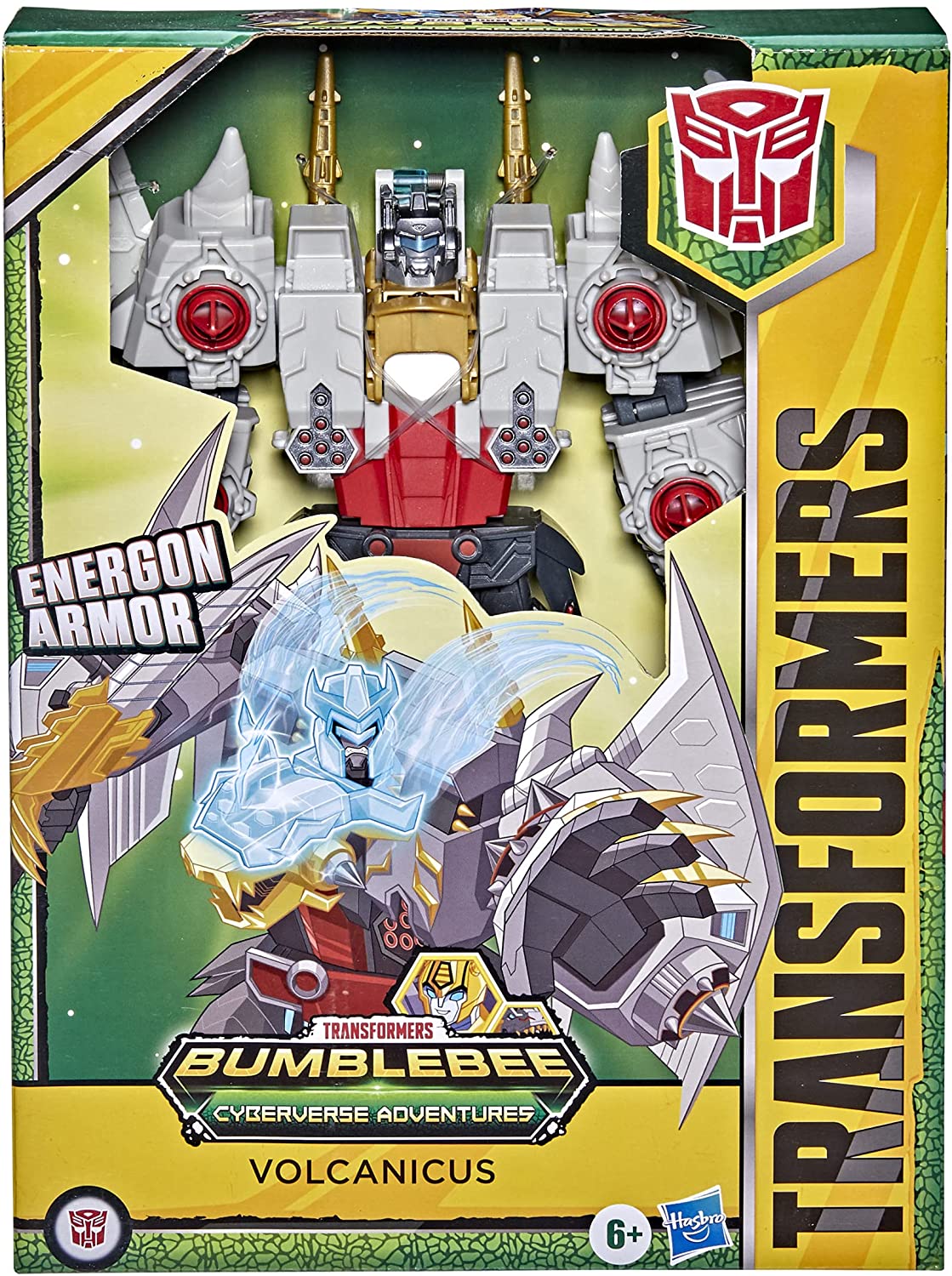 Packaging:
Volcanicus is packaged in a large cardboard box with an open window. Unlike packaging of the past, there is no plastic there, partly due to Hasbro's commitment to eliminating plastic from its packaging as much as possible. This gives you a good look at the upper body of the figure while the lower part is covered up by the striking package art showing Volcanicus activating his "Energon Armor"! The packaging still has the yellow and black Bumblebee inspired colors from previous Cyberverse packaging, but it also has green parts that look like they are meant to resemble scales, a reference to the Dinobots that drive part of season four. The back of the box shows the figure in both modes, calling out a 12 step transformation and showing off the "Energon Armor". The back also features the "Dinobots Unite" logo. It also calls out the "Twist and Change" feature of this figure and the cosell is "Ultimate" Hot Rod.

Robot Mode:
I am pretty convinced that Volcanicus represents an early design of the character before they finalized his animation model. For the most part, he does have many of the details seen on the cartoon. He features a bulky body with Swoop's wings on his back, creating a very dramatic silhouette. His arms have cones on the shoulders and forearms and the head (complete with visor eyes) is flanked by two rectangular...lights maybe? Meanwhile, there are missile launchers (non functional) flanking the head and there are beast mode heads on the knees, showing that Slug and Snarl form the legs. There is no mistaking who this character is from a sculpting standpoint but there are significant differences between this figure and the animation mode. These include:

When I first ordered this figure I had not yet seen the cartoon featuring him. It was no surprise to me that a Cyberverse was fairly sparse in the deco department. Volcanicus is mostly grey plastic with some gold and dark grey pieces. There are some red paint applications on the arms, torso, waist, legs and the cool looking missile pods on the lower part of the chest area. Gold paint is used on the heads at the knees and the feet. The face is paitned silver with light blue on the visor eyes. A tampographed Autobot symbol on the beast mode head rounds out the deco. But man, I wish this figure had the colors shown on the animation model. This includes several parts that could have been painted neon light blue to resemble lights (most notably on the legs) and grey and gold colors on the wings. When you put the TV show model and this figure side by side the figure (sadly) looks oddly incomplete. This is not to say that it looks terrible, but I really wish it had more colors that "popped" like the blues and yellow/gold on the animation model.

Volcanicus has eight points of articulation (not counting the wings, which have hinges on them). These are all in the arms which have four points each. His main action feature is his Energon Armor. To activate it, push the sides of the waist area down. The Armor will swing up from the back and fold over the robot head and beast mode head on the chest. The Armor is made of translucent blue plastic and it looks super cool, I just wish there was more of it covering more of the torso (though I imagine the position of the beast mode head would make this challenging). Volcanicus has two 5mm ports in his fists. This allows him to hold his tail/sword weapon. This piece features grey and dark grey plastic with liberal gold paint deco at the hilt. 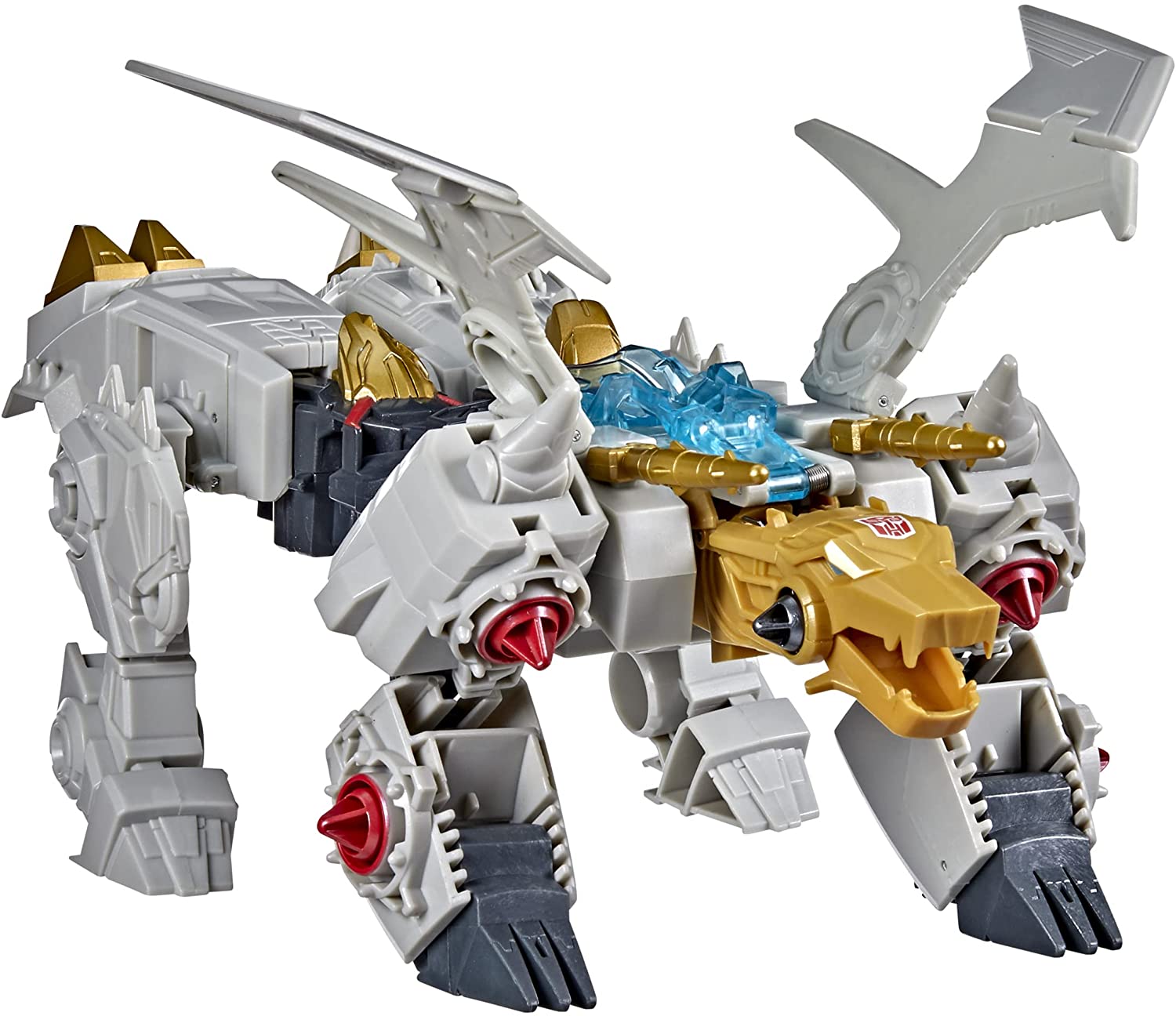 Beast Mode:
Volcanicus' beast mode is made up for this action figure and does not actually appear on the show, so it can pretty much be whatever the designers wanted it to be. To me, it looks kind of like a dragon thanks to some of the design cues on the head (including the shape of the teeth and spikes sticking out the sides of the head) and of course the wings on his back. He also has a tail with plates running down the sides at the base. More "spike" designs appear on the front legs and on the top of the back legs. To add some firepower he has (non-working) missile launchers that flank the head.

Grey makes up most of the color in this mode. The head is gold plastic while gold paint is used on the missile launchers and the base of the tail. Red paint is used on the front legs. The finishing touch is a tampographed Autobot symbol on the top of his head. Even without seeing the show the deco really looks unfinished. At the very least I wish there had been some color on the rear legs but they are just plain light grey plastic.

There are fifteen points of articulation on this figure, mostly focused in the front arms and the wings. The mouth can open and close as well. If you want to count the missile launchers you can add two more. Unfortunately the Energon Armor can be deployed but it does not neatly sit on top of the beast mode head. That would have been fun.

Final Thoughts:
Cyberverse is not intended for older collectors and that is the lens one has to look at this toy through. Volcanicus has some fun play value and he is a chonky bot with some cool sculpted details. He also shares many design elements with his animated counterpart, so kids who enjoy the cartoon and the character will likely dig having this in their collections. Recommended mostly for younger fans.